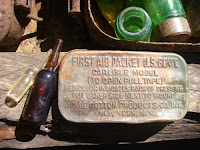 I know I scared you with that last dispatch. A few of you asked, "Why in the world would you do that to yourselves?" Here's why -

After dropping anchor and shutting off the engine, there is a quiet and a calm that follows a horrendous passage that is immeasurable. Even though our anchorage in Kira Kira was horribly rolly, slipping into warm crystal clear waters off the stern ladder, staring at pristine jungle running down to black sand beaches, and knowing that we have arrived at yet one more exotic country & that we did it on our own, brings a sense of accomplishment that is as equally hard to describe as the nightmare that was our time at sea. We could fly around the world, but then we'd never see these little villages that exist without tourists, and of course we'd be sacrificing that sense of accomplishment. We chose a different mode of travel, and it has its dangers and its rewards, both are staggering.

In an earlier dispatch I mentioned that 1 of the first things I look for upon entering a new country is how quick the people are to smile (the 2nd is the money and it's stupid here). Upon making landfall in Kira Kira, I immediately noticed a lack of returned smiles. Then I got a smile from an older man. He had a mouth stained red with rotting teeth. The next person looked the same. Then a woman I asked directions from spoke and I saw the decayed red teeth in her mouth as well. I made 2 flash conclusions. 1.) This is a plague island. 2.) They're sick and I need to get out of here. Then it dawned on me - these people chew Betelnut. I now know that damn near everyone here, has a rotten red mouth and spits their drug juice everywhere. It looks like some vandal went nuts with a can of "Rustoleum". They peel the husk off the nut, chew the seed, and then dip the bean into lime and chew that too. Not the kind of lime you'd squeeze into a Mexican beer, the kind of lime the Mafia would pour over your corpse before interning it in a shallow grave. They make it out of coral and wonder why their teeth are disappearing. The combination gives them a mild buzz. The lengths humans will go to for a "high" will never cease to amaze me. Truth is, the stuff tasted so horrible I couldn't keep it in my mouth long enough to feel anything.

Then we sailed to Guadalcanal. We sailed right up "The Slot". Pappy Boyington and his black sheep squadron, as well as 100's of other men flew combat missions through this same gap between islands. Before turning into Honiara, the capital of the Solomon's, we glided over Iron Bottom Sound, thus named due to the 62 huge battle ships that lay on the sea floor. Guadalcanal was the first troop engagement the US had on land against the Japanese. Midway was all planes, but Guadalcanal was a fierce 6 month fight that involved many more islands and tens of thousands of lives. It was a turning point for the war. Upon signing the surrender in 1945, Japan's admiral Tanaka admitted that Japan's fate was sealed when they lost Guadalcanal.

Our new friend Laurie took us to a small village in the Mount Austen area. This is what they call "The Gifu". It was the last of the organized Japanese resistance. I literally jumped from foxhole to foxhole and the amount of material that is still there is astounding. I found 5 live Japanese hand grenades; the pins still in them and ready to be pulled, canteens, teeth, morphine bottles, gasmasks, mortars, eye glasses, bones, buttons, buckles, clothing, helmets, and lots of live rounds. This stuff is all 65 years old and still lying there in the foxholes that those soldiers dug with their bayonets. Now let's talk bayonets - Laurie was given one by his "house boy", and since Laurie will never be able to fly that back into Australia, he traded it to me for 2 Coke bottles I found back in Vanuatu. You gotta see this thing. It's in really good shape and the wooden handle is completely intact. I am 13 years old again!

In 1999-2000 The Solomon Islands had what they call "Ethnic Tension". The island of Malaita seems to produce people that succeed at a rate higher than the other islands, jealousy ensued, tribal warfare broke out, people died, and soon RAMSI was created. "Regional Assistance Mission to the Solomon Islands". Almost all the white people you meet here work for it, or through the Haliburton-esque company called PDL Toll. It stands for Patrick Defense Logistics. They go to troubled hot spots like East Timor, after winning the contract. Hmm, I see some parallels here.

So far so good, but it's shocking how many things are out here to get us. Salt water crocodiles. They're all over the place. 30 - 50 Islanders die each year from crocs. I hired someone to clean the bottom of the boat. It cost $9 and he lived to spend it. I was reading up on the next string of islands we are heading to and the notice to mariners warns of sea mines. "Don't anchor here. Don't trawl there." It also says that some of the islands charted may be off by up to 2 miles. Scary as hell! This is also malaria country. Suzi and I started taking 100 mg of Doxycyclin every day, even before we left Fiji. Sunset is called the malaria hour. Suzi sewed 2 types of screens before we left the marina. The top hatches all have billowy covers with shock cord around the edges so we can open and close the hatches without having to remove them when the rain comes. She also made some semi-rigid screens for the water line hatches. She should patent those. Then she went on to sew a complete barrier that we use in the aft cabin as a secondary buffer. On this net she used an even tighter mesh and it even keeps out the "no-see-ums". Our bedroom has now become a "no fly zone".

We left Honiara 24 hours ago and we will be back there in about 7 more. The transmission is leaking fluid at an unacceptable rate. I hope this doesn't cost much or take long.