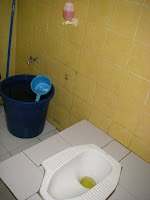 I prefer not to have my cultural experiences before the roosters crow, but because the Christian missionaries failed so horribly in this part of the world, Indonesia is a Muslim country (fact: there are more Muslims in Indo then any other country). That means the prayer towers erupt with blaring loudspeakers and the warbled chant of the faithful an hour before the sun rises. We've spent the last month in tiny villages, and to now arrive in a city of 2 million with neon signs and endless honking traffic is quite a shock to the system. Cigarettes, open sewers & diesel; these are the smells of an over populated 3rd world city. We traveled west to reach the east. Usually there isn't any culture shock on a sailboat. Our mode of travel is quite slow. It's the opposite of airline travel, which is closer to time travel in my mind. We have plenty of time to prepare. A smudge in the distance becomes an outline on the horizon, and then it's "land ho!" with many more hours to go until we confront it, and truth be told, usually the differences between the islands aren't that different, but traveling the 35 miles from Vanimo in PNG to Jayapura in Indonesia - that was a dramatic cultural face slap. I'm ready to love it, but a clue to those in Polynesia or Melanesia - don't rush it.

Let me tell you about the toilets: An open hole, a water tap with bucket beneath, and a scoop floating in the bucket. Nothing else. You tell me - how in the world could this be hygienic? My dad taught us not to even touch the tap without a paper towel in our hands. I have a high tolerance for filth but this is ridiculous. It was exactly the same in the Middle East. I've been warned about the left hand. Think about how many times your left hand touches your right hand throughout the day. I fixate on this every time I'm forced through good manners to shake some ones hand. I love the food, but I cringe thinking about the food handlers. However, I haven't been sick yet.

Hollandia Bay in Jayapura is deep. Not too deep for a wee sailboat, but close. Emelia and Barraveigh drove around in circles, mapping the bottom with our sonar to find an acceptable place to anchor. We nosed close to the polisi boat and from the deck, our new best friend Surispan, told us to pick up the mooring a short distance away. We call him Pan, and he's the greatest guy. He instantly became our tour guide and walked us all over the place. Anything we wanted he helped with; diesel, water, and all the officialdom and paperwork that we had to hurtle, he helped to lubricate. It took 12 hours to check in and out. That's a new low.

Apparently throwing rocks is how the locals get your attention. That's a bad habit. Suzi exacerbated it by hanging the laundry in her shirt & panties. That's a bad habit too. Apparently her luxurious bottom threatens these small people. That, and the fact that she broke a major cultural no-no in an Islamic country had us fighting with each other the rest of the day. She will now appropriately contain her lower unit, since, left to run free, it would try to dominate the globe.

We left Jayapura and began the 350 miles to Biak; an island above an island. It was a fine passage except for 8 hours right in the middle when we had 27 - 30 knots on the nose. The seas built up to 8 feet in no time and we were crashing straight into them. Our speed dropped to 2.7. I cursed the sea. We'll never get there. 2 hours later our speed was further diminished to 1.6. I longed for the fast numbers of 2.7. It's all relative, and nothing lasts forever. I sat in that cockpit for 10 hours in soaking wet foulies until it died down enough to go below for much needed sleep. Suzi was extra kind to me the whole next day.

Biak was nothing more than a pit stop. Just a resting spot before we finish this northern leg over the top of what used to be called Irian Jaya (today it's called Papua). We are in a hustle to beat the changing of the monsoons. (As I write this, we are 250 miles from Sorong, which is the safe landfall where we'll make our turn, and begin a southerly course. I think we'll beat the monsoons but yesterday we got clobbered again for 4 hours).

In Biak the first man I met was the Harbor Master's assistant, Rudy, who might even be kinder than Pan. The first thing he did was drive me to his house on the back of his scooter for cookies and Coke. I have the 2nd degree burn from his exhaust pipe to remember him by. Suzi says it's the badge of SE Asia. Then he took me to the copy center (they love paperwork and copies of paperwork really tickle them). Next, he drove me to all the offices I needed to go to for clearance and he served as my translator. He even saved me $5 when I found myself on the wrong end of a green seaman's booklet in front of the corrupt quarantine officer. "No problem. It canceled now. I cancel it for you." Then he drove me to the only tourist attraction, the Japanese cave that the Americans bombed during the war. Very interesting. We climbed down into it and then went to the museum across the street. I showed interest in the dog tags, he said a few words and out comes one that wasn't accounted for. I bought it for the equivalent of $15. "Corupsi" is everywhere.

Dave McGinn is my Stateside research director. Dave - please let me know if you can find out what happened to Bernard Feirstein from 172 E 4th St NY, NY. His father's name was William. I think the heaviest fighting was in '43 and '44. It might be a touching story if you let any survivors know that I have, and would be happy to return his dog tag. It's in great shape. Maybe he survived and merely lost it.

If he uncovers anything I'll share it with the rest of you. Please don't send me emails on this topic. This service is slow enough. Let's leave it to Dave.

After the WW2 museum, we stopped at a roadside cart and Rudy bought me lunch. He refused to take any money, even for the tank of gas he burned. Can you imagine that happening with a bureaucrat back home? Rudy and Pan have made up for all the "corupsi" I will ever encounter. These people are the best.

I have a mobile phone that I bought in Fiji. I activated it here. It cost only $1.50 and the rate is 18 cents per hour to talk. Not per minute, per hour. Does that give you an idea about how cheap it is here? I love it. Let's add it up - Jayapura & Biak: the bay is a cesspool, with plastic and garbage floating everywhere, the city is over run and filthy, but the people are excellent, everything is incredibly cheap, and the food is finally amazing. Death to taro!

Why speculate in the currency market? I know a better one in which you can never lose: Cigarettes. Buy them cheap in the cities; trade them for tons of good stuff in the islands. Yesterday Suzi was sitting in the cockpit sewing the Singapore flag. We were 16 miles off land. I was below. "Bobby! Bobby! Come quick! There are men here!" She was totally nude and a fishing boat with 2 men were yards away. With our engine running they can sneak up undetected if the person on watch is preoccupied (ahem Suzi darling). I jumped topside ready to do battle. The pirate warnings had come true. Nah, just some Indos wanting to trade. I hung 2 fenders and we swapped tuna for cigs.

My new vocab - Bahasa is the language of Indo, and it seems easy. I think I can learn it. I'm making flash cards.
Aman = Safe
Pangkalen = Wharf
Karang = Reef
Bahaya = Dangerous
But my favorite is Air = Water. It looks like some dreamtime equation of illogic, and yet sounds spiritual in a convoluted way. I've been in Asia only 2 weeks, but I've declared myself a Zen Master, as I repeat it to anyone who will listen.

Whitey...are you imposing your old TP rule of only 2 squares per flush? Do you have a sign up for that in the bathroom like in Tempe?