We contribute
We built the Panama Canal, we cured polio, we not only saved the world from the Germans but also from the Japanese (at the same time), and we put a man on the moon. Then we invented the personal computer, the internet, and Facebook (just so you’d have somewhere to complain about us), but I think the one creation that will have the most impact in the next century is our invention of a thing called “the shopping mall”. I’m not proud of that.

As for artistic offerings; we invented Jazz & Rock n Roll and Abstract Expressionism. However, in terms of culinary contributions I’m willing to admit that we have contributed little, except for the almighty hamburger. This simple concoction that has swept the globe might be one of our few original offerings but deserves the adoration it receives. We built it right the first time back in the 1800’s (yes – what was originally called a “Hamburger” hailed from Germany, but it was nothing close to what we call a “Hamburger” today) and though it has been co-opted by everyone, I don’t agree that it has been improved. I’ll even admit that avocado, and mushroom sauce are insults as well, so even my beloved Californians share in the guilt.

The following, are crimes against the burger that I have witnessed in other countries:
Korea – Broccoli (unbelievable – you should lose all foreign aid for that one), Australia – Pineapple, New Zealand – Beetroot and an egg. If Bush had found out we would be fighting 3 more wars.

Sometimes, when I get homesick, I grab my dill pickles and good old American mustard (no wine or horseradish), walk up to the restaurant and instruct the locals on how to build the perfect burger. Almost as good as being at home. . . And it reminds me of some fantastic burgers I ate at Musket Cove with my dear friends on Creola - Bill & Linda 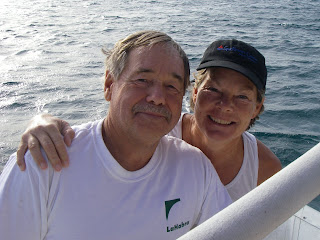 This isn’t my usual dispatch. I mainly wrote it to cheer up a friend who is quite sick. Bill – I’m holding warm thoughts for you. Please get better.

Post Script: Bill McKeever lost his valiant fight against cancer. He was one of the good guys. I miss you Bill.
Posted by Bobby at 12:48 AM 6 comments: