From Belize to Guatemala
"At the station, at the border, an egression, to the exterior law and order" – Lovely Day/The Pixies

I crossed into Guatemala with my Dutch Friends DeJara & Sebastiaan from Haarlem (If you are ever in need of the letter “a” it’s because the Dutch have them all).
After passing through what looks like a car wash, but is actually a fumigation station, I received a light misting of obnoxious poison, accomplished a few more tedious steps and was given 90 days. I thought that was just for Guatemala. I was wrong.

First Impressions
Almost immediately I saw a dead horse being eaten by a dog on the side of the road. There were lots of horse drawn buggies, very skinny dogs, and thatched roof shacks. It was another example of bad roads and poor people, nothing new here.

Flores
I prefer societies that are water based. Flores is an island in the middle of a lake. They have to contend with tides and currents. They know that in the afternoons when the winds get strong it’s harder to cross the lake so they plan accordingly. People who are land locked miss that. Everyone has to deal with the wind but when you add water to that it increases the complications. I find that they tend to move at a slower pace and are more attuned to the wx and that makes for a more interesting setting and culture. Plus, everything looks better when it reflects nicely off the water.

Tikal
I arrived in Tikal around 5pm and camped for the night so that at 5:59 the next morning I could be the first person into the park. 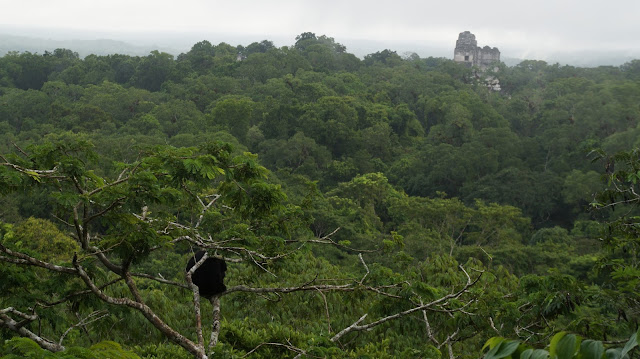 I didn’t see another human for 1.5 hours. It was my own Indiana Jones movie and I was in my element. I didn't park my tired ass in the restaurant until 11:00. 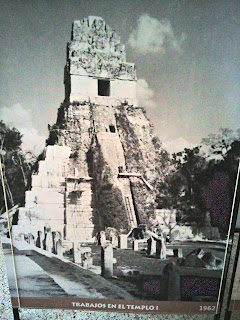 That's 5 hours of hiking that sweltering jungle and I still didn't see it all. I slammed a Gallo beer, waited for the rain to abate, and then went back to Elsie for a nap and a shower. I spent another hour in the visitor’s center and drove the 1.5 hours back to Flores. It was a fantastic day. I’ve seen many pyramids and temples but Tikal wears the crown. It’s the best of all the Mayan ruins. 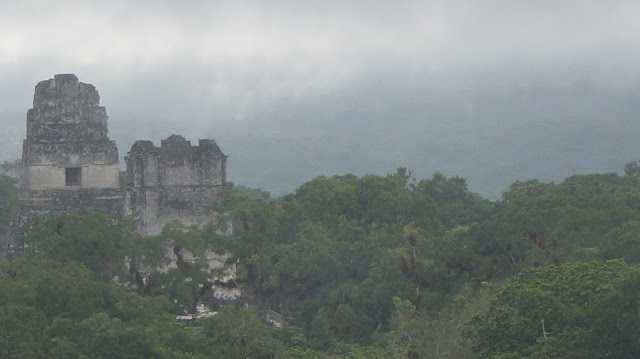 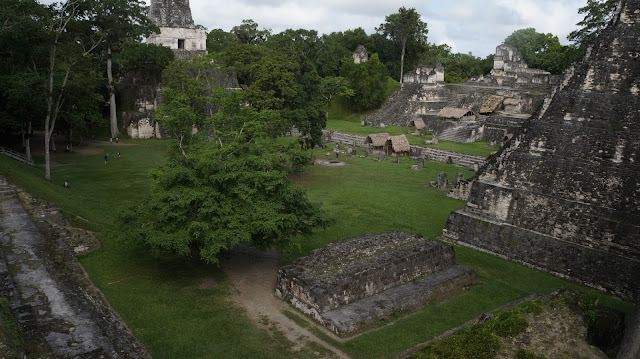 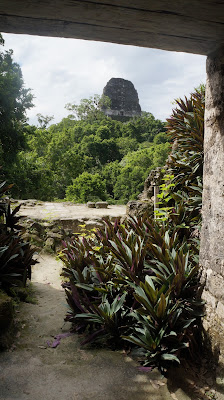 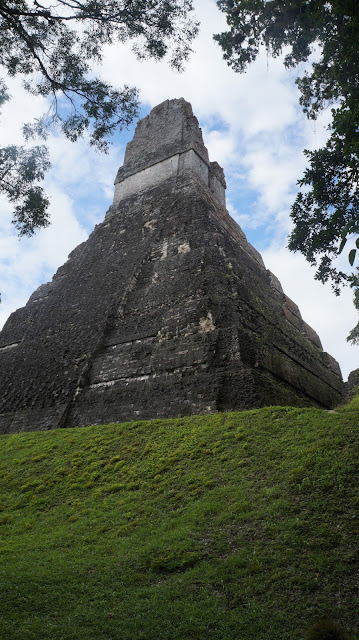 The Locals
There are 2 currencies in which I am filthy rich: Memories and Compliments. And although these Mayans are never going to be on the cover of Vogue magazine, there is no doubt that they know I think they are wonderful people. I hold them in high esteem and I tell them regularly, but when your frame is five feet nothing you don’t carry extra weight very well. 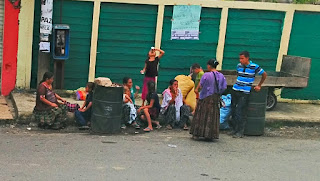 The mixed blood mestizos on the other hand… when the Spanish blood shines through, they can look sizzling hot. Jam 5 soccer balls in an evening dress and you’ll know what I’m talking about.

My Latest Speed Bump Disaster
Guatemala has the cruelest speed bumps I’ve ever seen. They are essentially mini-walls. It’s as if some man built a curb in the middle of the road. I was driving at about 35 mph and saw the bastard way too late. Unpainted without a sign and hiding in the dappled shade of an enormous tree. I slammed on the brakes and clobbered it. I was probably down to 20 mph at impact. I’m pretty sure I got 2 wheels off the ground. After my first inspection of the damage, I thought this trip might be over. I spent an hour jury rigging what I could so she was safe to drive the remaining 2 hours to Rio Dulce.
Once I got there my good friends Clyde and Mia took me into their home and Clyde soothed my negativity with what would become my new mantra: “Anything can be fixed”. 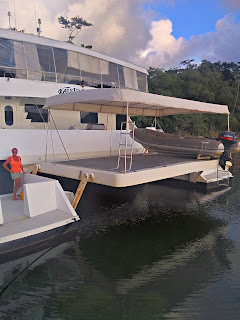 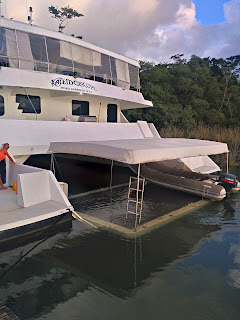 2 Weeks of Repair in Rio Dulce
I parked at RAM marina. If you are an overlander and need a serious repair, head to a marina. There is every trade represented and the quality of work has to be top notch since they service ocean going vessels. 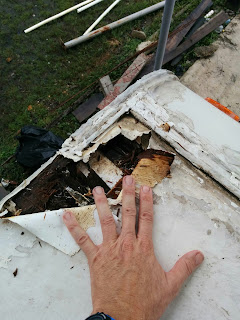 The crash had jarred Elsie so violently that I now had a substantial leak in the cabover section. I paid more to be relocated under a roof and plugged in for air con. God do I love air con. I opened up the roof and kept cutting more and more out until I found dry wood. It took me 15 days to dry her out, rebuild the roof and have the welder finish his job but she doesn’t leak and the camper is stronger than ever.


Antigua
Have you ever played with a baby elephant? I have, and it was an over the top fantastic experience. Now, was it a canned, fabricated, tourist experience? Absolutely! (Humans don’t get to play with baby elephants in the wild. The mother kills you or you have to kill the mother.) That didn’t make it any less incredible. The same goes for Antigua. It’s a canned, fabricated, tourist experience, but that doesn’t make it any less pleasurable. Those genuine authentic local experiences are very rare and rather improbable unless you have a good command of the local language and the time to allow them to unfold naturally. Even for a guy like me who lives in the country and doesn’t have a 2 week return ticket breathing down his neck, they are not commonplace. This trip is a smattering of both – 4 parts tourist fun, 1 part fleeting genuine brass ring experience, with a frosting of travel irritation. I call that a great ratio, and about the best you are ever gonna get. The world is just too over run to expect better. 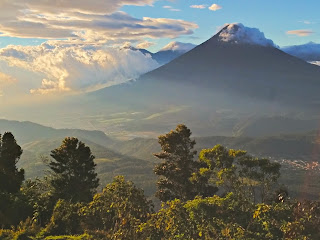 Studying Spanish
You might recall that I took Spanish lessons in Sayulita, Mexico for a couple months. I dug out my school supplies and reenrolled. The weather in Antigua is perfect. The town is charming. I joined a gym, a language school, chose my 2 favorite bars and hunkered down to improve my Tarzan Spanish. 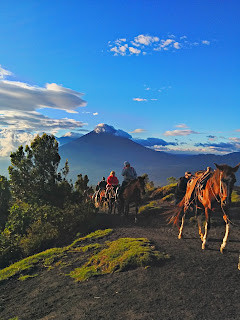 If I speak slowly I make fewer mistakes. It's just like typing. If I speed type it looks like Klingon and when I rush a verbal sentence the Spanish speakers think I'm speaking Portuguese.

Why Scrabble is so hard in Spanish
You need more vowels to make a word in Spanish and the letter “y” doesn’t count as a vowel. I’ve decided that learning Spanish will be a lifelong endeavor for me. I was a straight “C” student in school and I’ve put considerable effort into reducing my brain cells since then. Why is it so difficult? You need to think 3 words ahead before you even start speaking. Example: I want to say “the new table”. I start to speak and I begin with “El Nuevo”…. Then I remember table is feminine so I have to start again with “la nueva mesa”. Then I remember they put the noun before the adjective so I have to try a third time: “la mesa nueva”. I call that “The Spanish Scramble”.

When it comes to my ability to speak Spanish I probably make on average 2 conjugation errors in each sentence. The good news is that even though I might not know every word, I seem to know every other word. 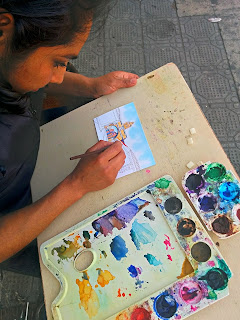 Said another way; there is always a “work around”. The days of being confronted with the impenetrable wall of Spanish are over.  I’m on the other side. When you speak Tarzan Spanish and make 10 mistakes per sentence no one even thinks about correcting you. There are too many errors. It would halt communication. At that point they are only trying to perceive the message drowning in your lousy Spanish.

Once you get to only 2 errors per sentence, something miraculous happens – people in a casual conversation will correct you. Then it becomes a game of finesse. At this point, I’m adding to my vocabulary and improving my conjugation. I’m gonna make it. But it wasn’t easy and I’ve spent lots of time and money fighting the good fight. I still prefer speaking Spanish with the elderly. They speak slowly and drop all the slang. The slang changes from country to country so every border I cross the learning curve begins a new, but not with the old geezers.

Leaving Elsie
As for me, I push forward in my exploration of the human condition in the third world. Admittedly, it is done thru the filter of Spanish and with the knowledge that I have the ability to pull the rip cord at any time and parachute out of this nightmare that these people are trapped in. Having said that, they are only dimly aware that they are living a nightmare. In fact, they are only living the nightmare of a spoiled first worlder, which they are not. So..... the circle chases its tail once more, and I realize that these happy people are only in a nightmare in my own mental constructs, when in reality they are as happy as anyone else on this big blue spinning marble. Ah, guilt free – I parked Elsie in a police station and flew back for Xmas in America’s Finest City: San Diego!