The Sounds of Nam
Vietnam is a country of superlatives: Greatest food. Lowest prices. . . Ugliest language. What if the world voted and it was decided that Vietnamese could not be spoken above the level of a whisper? I’d pay a hundred bucks a year for that. It might be the only way to make their language tolerable. It sounds like ducks gargling, but loud and mean and aggressive and painful and threatening to your inner ear. They’re not mad at each other – they’re just Vietnamese.

Here are the 2 crux problems with the language – Like Thai, it’s tonal. For Westerners, it’s nearly impossible to get it right if you’re learning it after puberty. The second is that their language was translated into Roman letters in phonetic Portuguese and then translated once again by the French. What a cruel trick. The French language subsided as the one spoken for diplomacy over 100 years ago but every letter wears a chapeau or is under dabbed with what looks like shrapnel from an ancient typewriter.

It’s not just the language. The general noise pollution is so severe that the citizens are probably hearing damaged in utero. Before you go; do yourself a favor – pierce your eardrums. Not your earlobes, your eardrums. It’ll be a lot less painful in the long term. Of course you would then miss out on the native music which sounds like a bag of cats in misery.

They could learn from the English who are the only people on the planet who can whisper and mumble at the same time.

Pedro, a native Spanish speaker from Ecuador was Aleja’s dive instructor as she earned her certification in this seaside vacation spot. 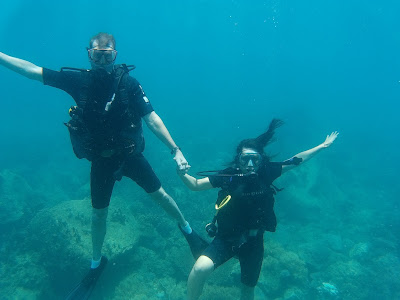 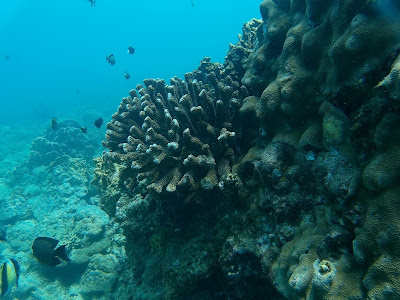 Cam Ranh Bay, which is just 45 minutes south of Nha Trang was developed in 1965 by the US military. If you fought in Nam you probably passed through CRB. It was lost in 1975 and the Soviets made it their largest port outside of Russia, hence the heavy Russian presence there today. They aren’t just tourists. They are the shop owners and the tour guides. Russians galore! 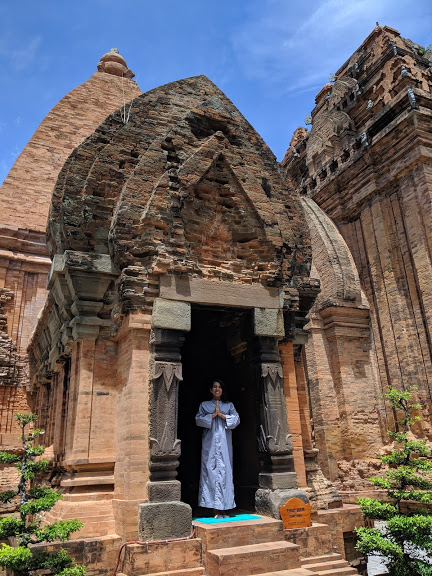 Cat Ba Island
You probably know this region by the more popular name of Halong Bay. 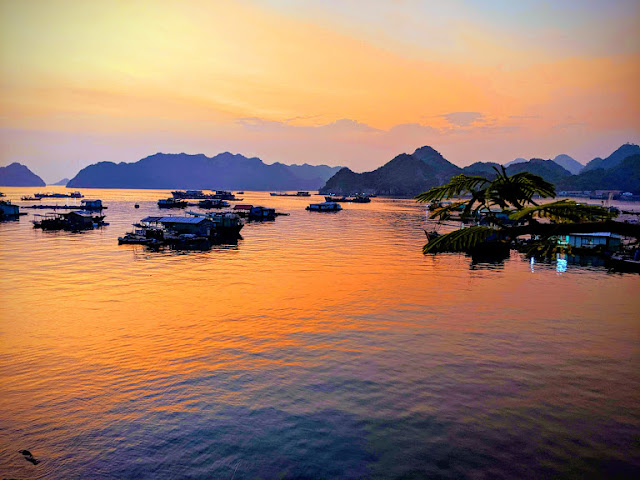 Timing the Contractions
You can make a contraction out of just about anything: Cranberries and raisins becomes “Craisins” But now how are you going to contract Crazy Asians? Are you just going to tell an insane Asian (there are zero acceptable synonyms for “Asian”) that it’s too late; Ocean Spray beat you to it, and now there’s no cool contraction left for you and your lunatic Asian brothers?

Crasian Drivers
They are the world’s 3rd worst drivers (behind Peru and Colombia), but there is no road rage. They’ll do a 6 point U turn in the middle of a busy road and piss off 30 people but nobody breaks their poker face. That counts for something. I just don’t know how to work it into the quality of life matrix yet, but they should be awarded points on some scale.

Tam Coc
I refuse to write a travelogue but be aware… you don’t want to stay in Nin Binh, which is the name this region is labeled. It’s industrial and not what you’re looking for. You want to stay in adjacent Tam Coc. Was this my favorite part of Vietnam? Maybe. I’d go back and rent a scooter and do it all over again. I call every woman of child bearing years “Mamasan” and when something is good I say, "Number One!" They always understand and repeat. Tam Coc was Number One. 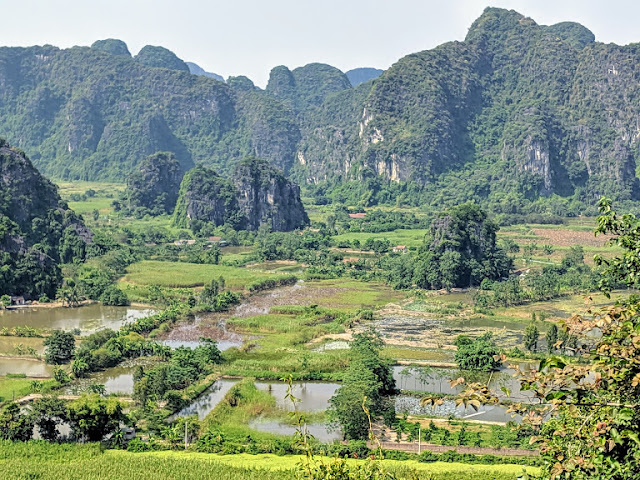 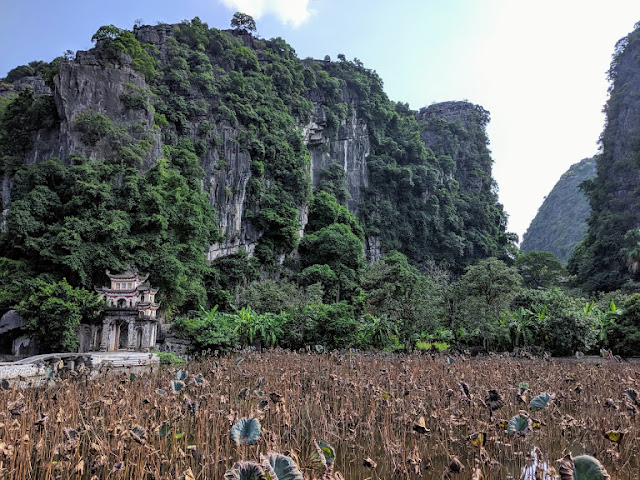 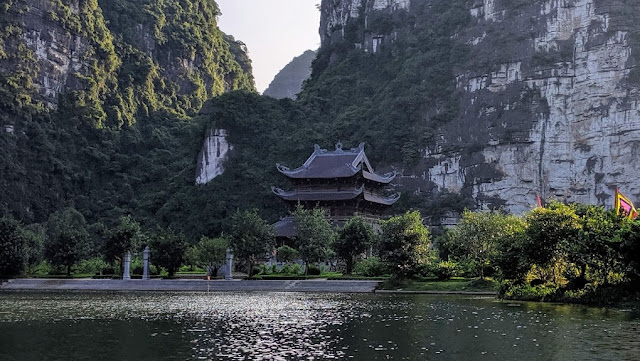 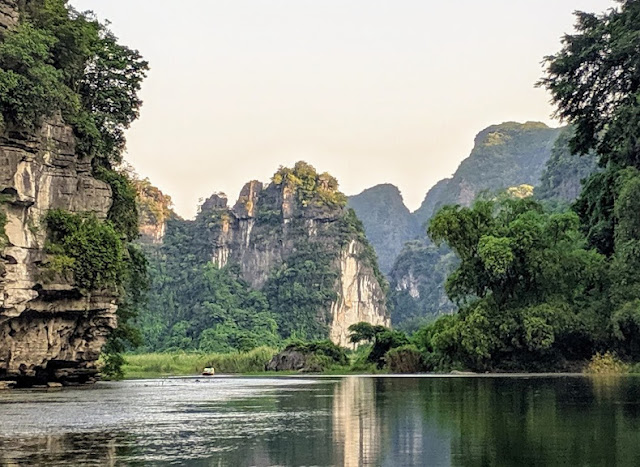 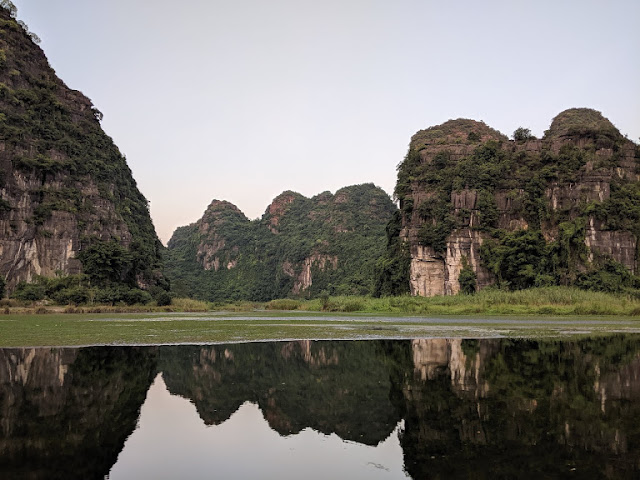 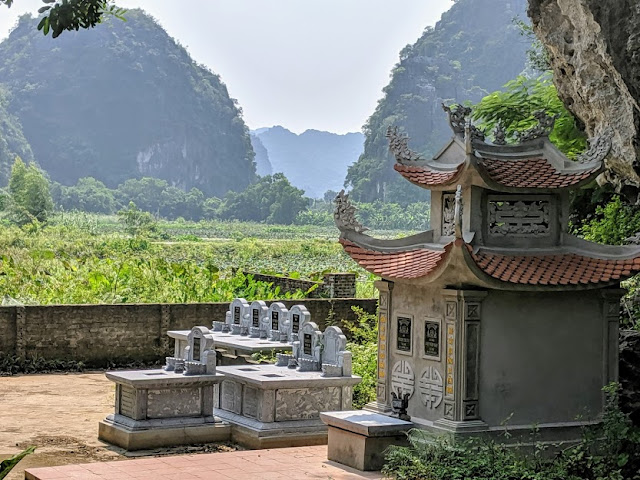 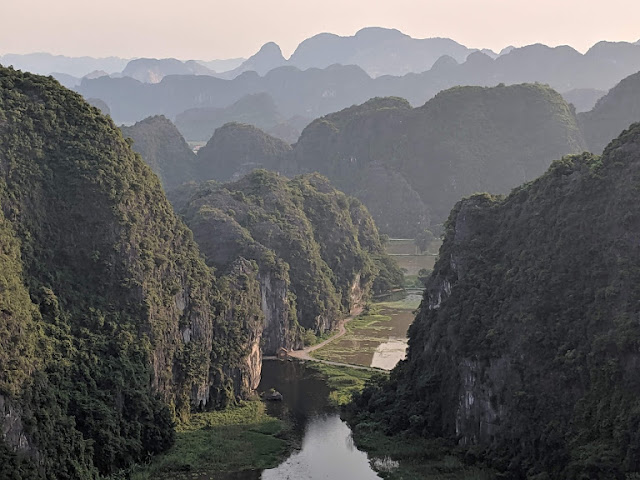 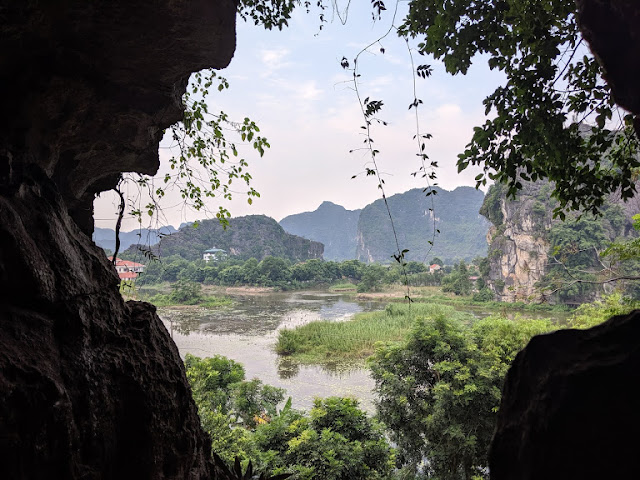 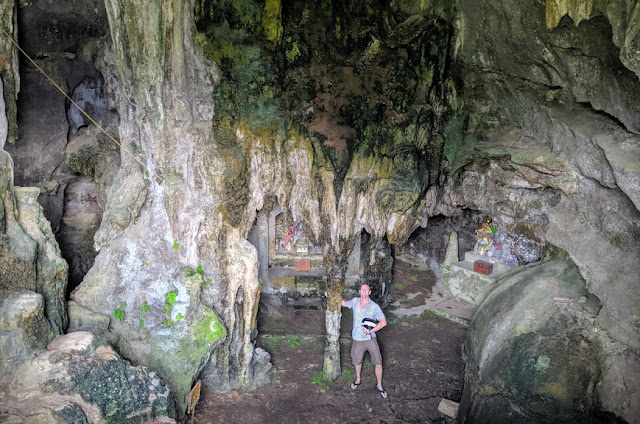 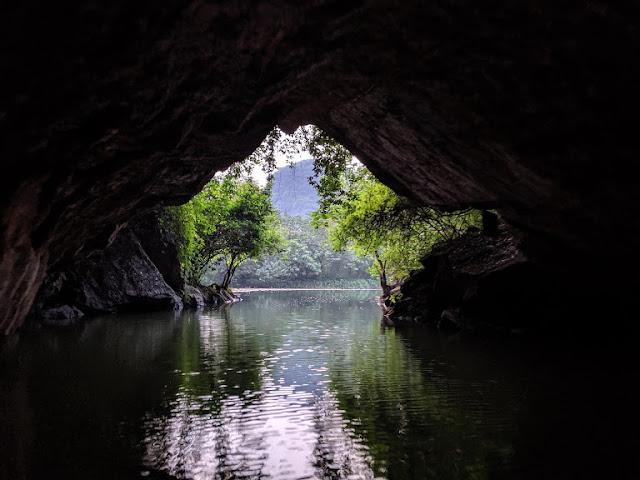 Hue City
The Kubrick movie Full Metal Jacket is set here. It saw intense fighting during the war and a small bit of the evidence remains. Go for the history, stay for the salt coffee. It sounds terrible, tastes wonderful. 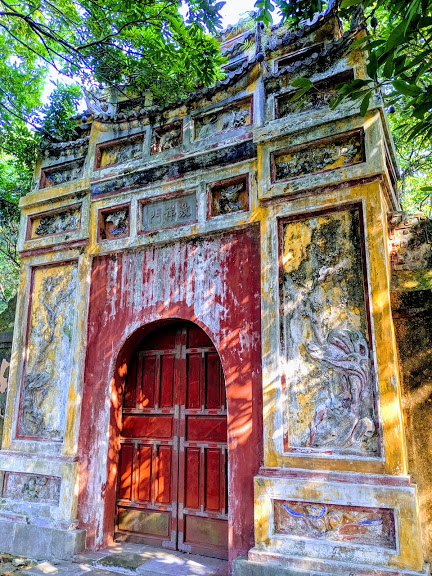 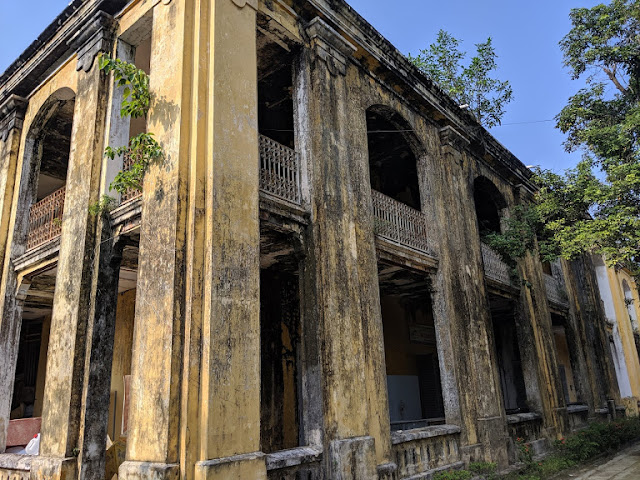 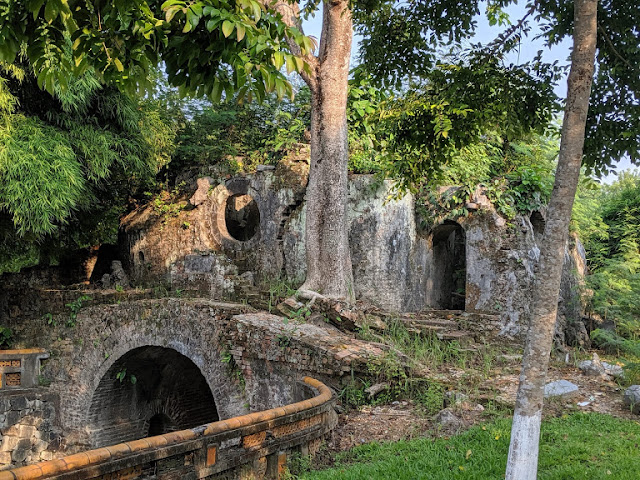 My Facial Recognition Software Doesn’t Work In Asia
That girl could be 13 or 33. I have no idea. And forget looking at the body for the deciding factor – identical prepubescent bodies. It’s hard enough just to tell male from female. There are no curves. A fully developed woman looks like me at 13 – gangly & boney with no chest and a flat ass you could iron a shirt on. I just spent 4 years in Latin America. The lower units here are like the Grinch trying to ruin Christmas. While getting a massage one afternoon the masseuse pulled Aleja’s panties down way too far just to get a gander at her whole caboose. They haven’t seen rumps like that … ever.

Hoi An
This is a gooey little fly trap of a town. We couldn’t bring ourselves to leave and then stayed nearly a month when I got sick.

Aleja runs fake tours in Hoi An
"Follow The Corn"

I Got Sick
When you are poor you never stay home no matter how sick you are so I'm always afraid of who’s working in the kitchen. I got sick. It happens. Not a bad country to get sick in though - cuz of all that soup.

Hanoi
Not my cup of tea: Loud, congested, filthy, atrocious air quality and a shortage of smiles. We used it as a hub to visit the neighboring attractions. However, one of the niceties of South East Asia, and this is across the board – They will never ask you to leave if you’ve stopped ordering food. You can have one cup of coffee and sit for the whole afternoon. Try that at Applebee’s 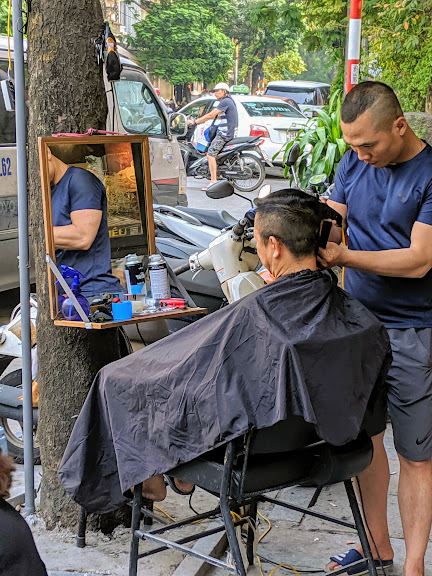 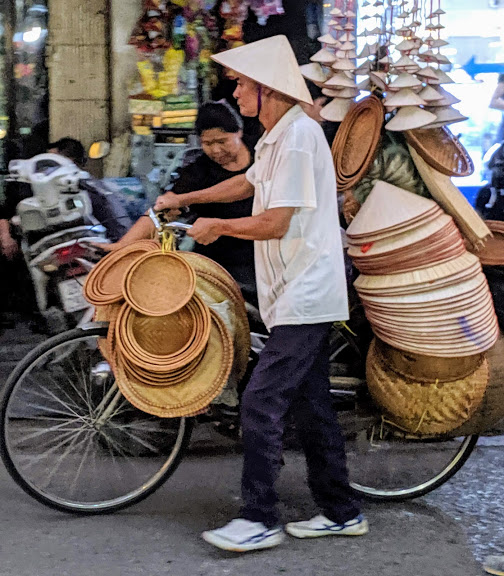 The communist North won the war and gained unity and autonomy and that's in the history books for all to read, but the economic model that the North fought for seems to have been abandoned in exchange for capitalism, which was what Ho Chi Minh fought against. So did the South actually win after all? 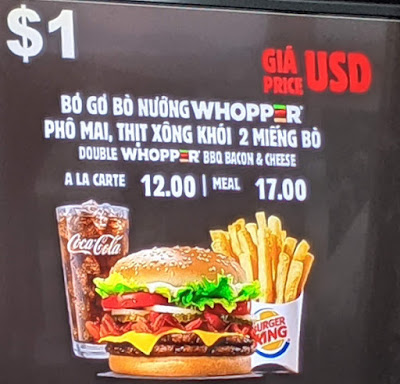 This photo was taken in the Hanoi airport. We dropped 20,000 tons of bombs on Hanoi in only a 2 week period, and guess what... Burger King takes US dollars. You really think we lost the war? They were going to be capitalists anyway. There's just no stopping it. One of many wars we didn’t need to fight.

They aren’t the most sophisticated capitalists however. Compare them to the Balinese. At least the Balinese try to make friends with you first, “Hi, where you come from? What you name?” In Vietnam their unsophisticated level of marketing begins and ends with a gruff, “You buy something from me!” I call it comrade salesmanship. They just haven’t had the number of years in the free market that the other countries have had.


This Life Vs The Last One
I love living my life like I’m riding the metro – I’ve got all my stuff together in 2 bags, and I’m ready to get off at any stop. It has its down sides, but with one country in the bag, so far… backpacking South East Asia has been a winner. 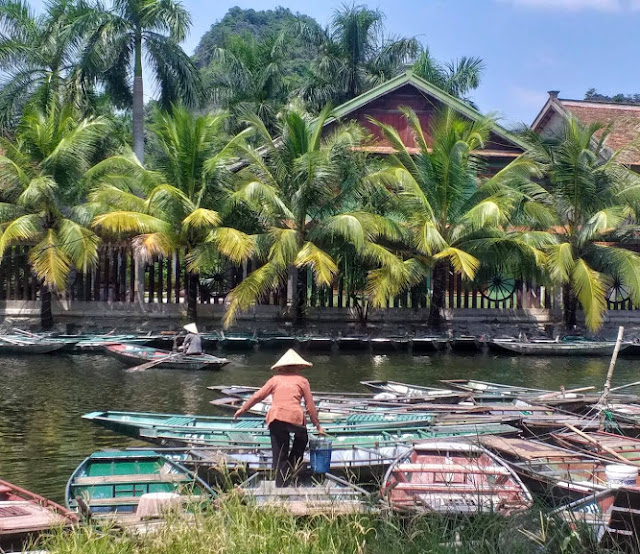