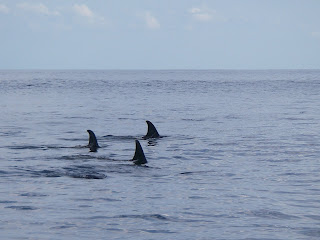 That's right. I didn't think it could be true either but they're here and they look terrifying. We had 2 pods circle Barraveigh today. I just finished reading a book called "Surviving the Savage Sea" about some Scottish family that survived in a life raft for 40 days after their ship was holed and sunk by killer whales. My mom's on a plane to Tokyo right now or else I wouldn't have told you. By the time she gets this email we'll be safely out of their zone. Apparently it's easy to run over them when they are sleeping, and then because of territorial macho bravado they have to, by the code of the killer whale, sink your boat. It's all animal kingdom stuff dude. I'm going to learn a lot more about that in the Galapagos. Like which turtles you can't eat.

No wind at all. We are sweltering in the tropical heat and the motor only makes it hotter. The stove is even worse, but Suzi's upside down pineapple cake is worth it. That girl bakes daily. Awesome.

We've been motoring for the last 24 hours. We've covered 280 miles and have another 620 to go. The sea is so calm it looks like oil. This is the ITCZ. The Inter Tropical Convergence Zone. You've probably heard it referred to as the Doldrums. The Spanish explorers of 500 years ago called it the Horse Latitudes. They would chuck their horse into the sea in order to lighten the boats when their provisions ran low. I'll bet that freaked out the Orcas.