My mom and brother are here visiting me. I’ve told them first hand, the story that I am now going to relate to you. It’s a “big time near miss” and I didn’t want them to hear it from anyone but me.
Suzi and I were in Suva, which is the capital of Fiji and located on the southern coast. It’s an old harbor with dark muddy water, lots of discarded junk laying on the bottom and rather exposed to the southwest winds. The squall showed itself to us before the winds really built. I pointed out the black clouds to Suzi and we prepped the boat for the excitement that was to follow. By 07:30 the winds were up to 25 knots and the anchorage was bouncing us around like we were at sea. By 08:00 the winds had built to 35 knots and the seas were 8 feet and choppy as hell. I started the engine just in case we dragged. We were only about 2 football fields from the huge fishing boats that were hanging on the gigantic mooring ball behind us. The bow was bouncing up and done so violently that it wasn’t safe to go forward. 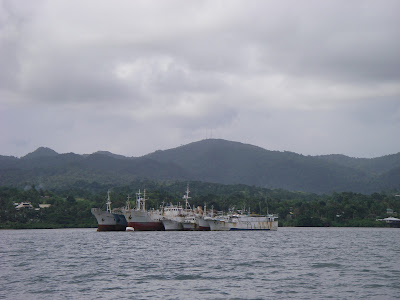 At 08:30 I felt it. Barraveigh’s nose fell off to starboard and she began turning to face the opposite direction. That meant the anchor had broken free from the seabed. I slammed the tranny into forward and at 1800 rpms the nose turned back into the wind. I didn’t want to drive forward; I just wanted to keep up enough power to stop her from falling backwards. During some gusts I really lost ground and had to gun her to get her back to where we started. Those big fishing boats were looming just behind me and I could see them pounding up and down in these rough conditions. If I hadn’t got Barraveigh pointed forward and revved up enough to stop our slippage over ground we would be hammered in half and sunk by those monstrous ships. And if they didn’t end us, the reef just behind them would have. Thank god I have a good strong engine.
Just then – the engine hesitated, and quit. I thought I was going to puke. “How could this be? What would stop my beloved Perkins?” Then it came to me all at once. I had a nuisance fuel leak at the throttle that I planned on fixing when we got to the marina. Since we planned on sitting at anchor for a week, I shut off the fuel line from the tank to the Perkins to reduce the drip. This whole time I was running her on borrowed minutes. The wind was now down to only 25 knots but we started drifting backwards again. “This is it. This is the day I lose it all.” Suzi popped her head up, “Why’d you shut the engine off?” “I didn’t. It died.” “Oh my god!” She took the wheel and I dove below to open the shut off valve and bleed the air from the system. “How are we doing?” I screamed, the vomit rising in my throat. “Still drifting. You gotta do something.” I tried everything but nothing worked. We got within 30 feet of the boat smashing fishing fleet when the anchor finally caught and took hold. The stern swung around and the anchor held as she straightened out. It was pure luck. We were 30 feet from the end of my dream. Just pure dumb luck. I was panting and trying not to throw up. It really rattled me, but it wasn’t over. I knew I needed to get that engine running again before the squall clocked around and hit me from another direction. I knew that anchor wasn’t properly set and if there was a wind shift I could drag out to deep water and then unto the entrance reef. I tried for an hour to bleed the air. No luck. I got my friend Ken on Spray to come over and we were once again defeated. I had one more idea. I called my friend Dan who lives on shore and has a car. “Dan – I’m in a serious situation and I need a diesel mechanic immediately. Can you get me one and bring him to the Royal Suva Yacht Club please?” What a star Dan is. He found Tesi and drove him to the yacht club ad I put that monster of a man in the dinghy and got him out to Barraveigh as fast as I could. It took a couple hours and 6 hands but we got it done. I could barely drink my celebratory beer. I over paid him and thanked him numerous times. We reset the anchor and were asleep as soon as the sun set. What a nightmare. That was over 2 months ago and I still cringe when I think about it. Captain Bob
Posted by Bobby at 6:19 PM