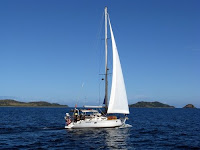 My visa is good for only 9 more days. The time to leave is upon us. Let me say right here that I will return to the island nation of Fiji some day. It's the best I've seen so far and my decision to stay here for 6 months was the correct one. I really love Fiji.

As usual, it's the people who make an exceptional experience fantastic, and Fiji is populated by the most gentle people in the world (the Indians 45%), and the most friendly (the Fijians 55%). It's as if the Fijians have a score card that they review at the end of the day, "How many people did you say Bula to today?" "Let's see - 38." "Ha, I win." It's as if they have a happy gene and they just have to smile. Now that I'm a short timer and am about to leave, I literally have to avert my eyes and cross the street so I don't make any more friends. They are just excellent people. The Indians are more demure but highly personable. I never say "Bula" to an Indian, always "namaste" or "RomRom". The fact that I use Hindi instead of Fijian makes their faces beam. Then when I hit them with a "Phir Melange" (until we meet again), it blows their mind and they won't let me leave. I've never been anywhere in the world where such poor people give so much.

One of the reasons Fiji is so great is because the citizens are unsophisticated capitalists. They don't know about add on, or upgraded sales (i.e. "Would you like some fries with that burger?"). That makes for more trusting business exchanges because they don't start their offer with the low-end product only to switch once you've been baited. There aren't extended warranties, or service plans or "gold package" offers. Simple straight commerce, it's a nice change. Plus - they didn't get television here until 1991 so that probably makes them better people too.

Here's how Fiji got its name: Hundreds of years ago the natives called their island Viti. When Captain Cook was in the Tongan Islands he asked the savages there, what the islands to their west were called. Now the Tongans can't make a "V" or a "T" sound. So Cook picked the absolute worst word for them to pronounce. It came out "Feegee". Or at least that's what Cook heard, so when Cook wrote about "Veetee", he referred to it as "Feegee", or as we know it today; Fiji. The "Vitians" quit trying to correct the world long ago and are now resigned to the name Fiji. But just so you know - the real name is Viti and in private, that's how they refer to themselves and their islands.

My first thoughts upon arrival in a new country are always the same: "Do these people seem easy to smile?" "What's the money look like?" "How much is a beer?" Here in Fiji the coins are manageable and the denominations are practical. I still remember the stupid mass of Mexican coinage that would build up in my pocket daily. The weight never equaled the value. Smaller coins were worth more, silver cost more than gold. That's not right. Fiji's coins mimic the English, right down to the Queen. As for the easy smiles - that's a currency Fiji is rich in. Those beaming teeth are a great welcome to this country and I'll miss it for a long time. I'll bet Vanuatu is pretty good too.

We are currently swinging on a mooring ball at Musket Cove off the island of Malolo Lailai. Today is Suzi's 3rd day of PADI training for her open water dive certification. It's nice to be out of the marina but we'll be returning again for our final provisioning and repairs, before blasting off for the 3rd leg of this circumnavigation.