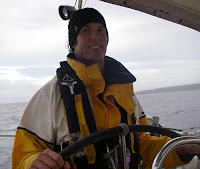 It's June 1st 2008, 11:50 am. At 09:00 we pulled up our anchor at Mana island. Creola escorted us through the pass, and we motored along the western side of Malolo with 20 knots on the nose the whole way. We're still inside the protective reef and the waves have us slowed to only 2.7 knots. It's going to take another 3 hours at this rate to get out of the Momi pass. Suzi is sleeping in the cockpit. It's the first time either of us has been to sea in 7 months. Ok - we've motored out to the Mamanuca islands but nothing outside of the protected waters, and even as protected as it is in here I think the poor girl is feeling it. Strange cuz she never gets seasick. I'm about to take the Fijian courtesy flag down from the spreader. It just feels wrong. I hate saying goodbye to this country and all the friends we made. It was tough waving goodbye to Creola for the last time. They're heading to the Marshall Islands instead. A little depression mixed with a little trepidation about returning to the big blue makes for a foul mood.

Back at the marina we had a little fish that made a home in the scupper tube. He stayed in there all the way to Mana island. We've tried everything to scare him out, but the deep water has him spooked. He's a reef fish, he isn't gonna make it out in the big ocean. He better get out now, or stay all the way until Port Resolution in Vanuatu, which is where we hope to make landfall in 4 - 5 days.

It's 2pm and we just cleared the Momi pass into deep water. We're double reefed in 20 knots of wind on the beam and making 7 knots of speed.

There's a fear that eats in my gut. It's that'll I'll spend so long in harbor that I'll forget how to sail. That I won't remember how to navigate. That I'll screw up and sink my boat. All these fears and landslides of confidence haunt me. You look at a map and you see an innocuous outline of the continents. I look at the same map and I see a chart of all the life threatening waters and reefs I have to navigate to complete this mad dream of mine. My god it's an enormous blue marble. The distances are so far and my boat is so small. It scares the hell out of me. Then I take a deep breath. I focus on how far I've come. I steel my nerves and I push myself back out into the unknown and cast my lot to the big salty. There's still a fear about what to do if the conditions quickly worsen but for now, at this moment, this feels pretty good. I let my tension ease. I'm out here again. I'm a sailor in command of my ship. Barraveigh seems to know what to do, and fortunately, it's coming back to me too. It's muscle memory. The body knows what line to grab, how to work the winch, when to cleat and clutch. We're going to be fine. It's going to be a fast wet ride though. The swells are rolling us over quite far.

It's 450 miles to Port Resolution.

June 3rd 10:30 am. I just changed course to head for Port Vila on the island of Efate instead of Port Resolution on the island of Tanna. After looking at the charts and the wx report, I've decided Res won't be a safe anchorage with these strong SE winds. Suzi is completely dejected. We now have 2 more nights of this and have added another 70 miles to the passage.

The gap in this travelogue is due to severe sea state. The first day out we thought about turning back. It was rough and Suzi was very sick. At this point we've reclaimed our sealegs. Let's just forget that June the 2nd ever took place. We're doing 6.8 knots in 20 knots of wind on the stern. The seas are 10 -12 feet and occasionally breaking. They look like monster puppies running around crashing into each other with the errant large guy trying to jump into the cockpit, and succeeding. We're running a course of 270, that's due west. We have 247 miles to go.

It's 9:00 am on the morning of the 4th. We are 103 miles from Port Vila. It's like living in a virtual sailboat simulator. No wait - this is all real. Nothing is broken but the boat is a mess. No ripped sails, no missing fuel jugs (almost), nor leaks, but we live in our foulies and everything is salt damp. Our appetites are just now starting to come back. We're having a greasy hair competition and I'm sporting a beard. The people at quarantine aren't going to enjoy our olfactory gifts I'm afraid.

And so we have begun Leg 3 of Barraveigh's circumnavigation. Here's the itinerary: The month of June in Vanuatu, the month of July in the Solomon Islands, the month of Aug in PNG, and entering Indo waters on the north side of Irian Jaya Sept 1. I think we'll do 3 months in Indo. That puts us in Bali near the end of Oct, and ending the year in Malaysia or Thailand depending on how much we like Malaysia. The plan now is to meander around those same waters for all of 2009, maybe even make it over to Cambodia and Vietnam.

One more bouncy night and we should be in port. Enjoy your stationary, stable existences because gravity isn't treating us kindly at the moment.