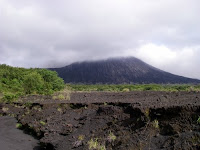 There are few things I've experienced that have absolutely taken my breath away. Standing at the rim of an active volcano and peering over the lip (that could collapse at any time) was beyond awe inspiring. We could see the molten red lava slosh upward, and hear it pound on the rocks around it, sounding just like waves crashing on a beach. Deliciously terrifying. That immense gaping maw with the white smoke that bellowed out and temporarily obscured the far rim made it seem otherworldly, verging on the brink of evil. I heard my lips push out a sound like I was punched in the stomach. That is literally what they mean when they say, "It took my breath away." "Wow", and "Oh my god" were the only words I heard anyone repeat for the next few minutes. Our native guides stood close by, I imagine they were prepared to grab us if we fainted. 5 billion years old and the core is still molten rock. Being this close to it reminds one of just how thin the mantle we stand upon truly is. There is something within the human psyche that craves fear. It's why amusement parks and ski resorts can charge $100 for a day pass. The ocean does it to me regularly and now the earth itself has shocked me into seeing how small and finite I am. It's a beautifully humbling experience. My suggestion to you: Seek it out.

Before I left on this trip, I, and the world famous "Monkey Brothers", climbed the highest peak in the 48 lower States; Mt. Whitney in CA. It was a 3 day exercise in suffering. This climb was 11 hours of the same. For the last 3 hours of down climbing I was in excruciating pain and last night Suzi moaned in agony at regular intervals. Today we are hobbled, yet proud and enriched. Tomorrow we'll be fine, and we'll sail to the island of Pentecost where the natives perform a ritual we call, "Land Diving." You've seen pictures on "Ripley's Believe It Or Not". This is where they tie vines to their ankles and jump off enormous towers of scaffolding to crash into the softened earth below.

What an amazing window on the world this cruise has been.

P.S./ I was asked a question about my last dispatch. I apologize if my response is boring and technical. It's attached below if you are interested.

VMG - It stands for velocity made good. SOG is speed over ground. VMG computes the speed I am making relative to my target waypoint. SOG is merely the speed the satellites are tracking me at.

Example - My target waypoint is 100 nm due north. If I was sailing at exactly 360 degrees and SOG was 5.0 knots then my VMG would also be 5.0 knots. However, if I crack off 20 degrees for comfort and my speed stays the same my VMG will no doubt drop. In other words: I might still be moving at 5.0 knots, but I'm not moving in exactly the correct direction at 5.0 knots, so my VMG is less than my SOG (the computer has a program for computing this). Flip side of the coin: If I crack off 20 degrees to increase speed it's possible that as my SOG increases to, let's say 8.0 knots, my VMG might actually rise above the 5.0 knots I was doing even though I'm 20 degrees off course. This later point is less probable the closer to the target I am.