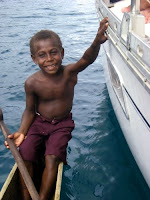 You might find it interesting to know that for this 3rd leg of Barraveigh's circumnavigation, we've chosen the path less traveled. Most of the sailboats who pass through the South Pac sail through the Torres Straight, Oz and then travel directly on to Indo (This might be a good time to consult a map). They'll miss Vanuatu, The Solomons, and PNG. This northern route is seldom taken by the cruising community. So far - that's been very rewarding for us, in the sense that these anchorages aren't over run like some of the island nations we've visited prior. I'm sure it will have a lonely side to the equation in the future though. One thing that we've done to offset that, and to add to security is to "Buddy Boat". Emelia is a 48 foot C&C with 4 onboard - Gene & Jennifer, and their 2 sons Ryan and Evan. Ryan can hold his breath even longer than I, and Evan beats me at accents. They are fellow Americans whom we met a year ago in Tonga. This should be a good partnering. We leave today for PNG.

And why do the majority of the boats take the southern route? We believe it's because of the rumor mill and the scare factor tactics that run rampant amidst the cruiser circle and the landlubbers. Let's face it, this is a research vessel. I do my own studies thank you. You heard something second hand? Fine - I'll go there myself and find out first hand. The expensive agent needed for the Galapagos was completely unnecessary. The bank breaking bond in French Polynesia; I avoided it. The notorious NZ customs officials were no problem at all. Fiji was supposed to be unsafe due to the coup - total rubbish. Problems are possible, and on a long enough time line, absolutely unavoidable, but we've found that your experience is often based on your ability to make a personal connection (or not). The only experience that counts is your own. Take all you hear with a pinch of salt. It's all about unlearning preconceptions.

Dispelling preconceptions: There are things that we except as maxims, that upon closer inspection, turn out to be utter fallacies. For example: "Neil Pert is the world's best drummer", or, "It's not gay for cyclists to shave their legs", that's crap! After spending a year in Central America I've now crossed the Pac, and when I faced these islanders I was expecting them to have their hand out like they did all over CA. That pamplemousse came with no strings attached. It was a gift. They have a gift society in this part of the world. It was my assumption (my preconception) which tainted the intro and thus the relationship. I've since learned better.

Hire me to speak at your children's school. I will bring my own soap box.

We are at an amazing anchorage. We're nestled between 2 islands; Mono & Sterling. This was a strong point for the Allies during the war and Frank showed us the Avenger aircraft that the jungle has reclaimed. He also took us to the airstrip and pointed out that the runway is still in use after 65 years and that the roads in Honiara are falling apart after the first hard rain. He loves American quality. Wilson is the local lobsterman. Anyone who has an underwater torch can be a lobsterman. There are usually a couple per village. For $2.15US huge, monster lobsters are delivered to your boat. God those were delicious.

Here's a new sport - Skurfing. It seems to happen whenever cruisers have the following ingredients: a 15 hp dinghy, a surfboard, and a flat anchorage. It's waterskiing on a surfboard, and it's the sport of the frustrated surf enabled sailor who can't find a wave.

Then we shoot the pikininis with water cannons and stage mock marine battles. After, I teach them nonsense words as greetings and make them repeat them endlessly for sweets. They seem to love it. I've always wanted to raise my own army. This would be the place.

Wayne D Gray is a man who works in the bicycle industry, and he's increased my life quality immensely. The dinghy still leaks water, in fact, I believe I've probably pumped ½ of the Pacific by now, but it doesn't leak air anymore. He sent me 64 oz. of Slime. This is the green mucous product that you put in your inner tubes to seal a puncture. It works well on massive tubes also. First I measured the run rate: I dribbled it down a vertical board as a test and timed how fast (or slow) it moved. Then I measured the distance to the internal leak, squirted it in, pulled it up vertically using the halyard, and started my stopwatch. I then laid it horizontal again when the timer told me it was at about the spot I needed it. Everything I just described took place back in Fiji. We had some air escaping recently, but I executed my trick again and she's as tight as a drum. It's a little victory, but it greatly affects our daily lives. Some day soon - I'm gonna get that water leak, and then the "kiddie pool" jokes will be over. Thank you Wayne D Gray!