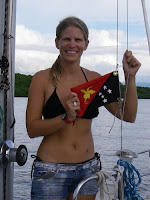 We've just left our first port of call in the exotic sounding nation of Papua New Guinea. This might be where it starts to turn weird. These people are the blackest on the planet. When I was in Fiji I met some Indians who were actually darker than the Fijians but these people aren't even a skin tone. They're black like plastic. Black like a black hole. They suck light. There is zero brown in their pigment. No whites have infiltrated this blood line.

Buka is the little island that sits on top of Bougainville. It seems like it has potential. We spent 1 night and 2 days there and most of that time was spent doing paperwork with the port authority, changing oil and filters, and refueling Barraveigh. I didn't get to see much but I can report that the money is the prettiest I've seen and that during their civil war over gold, they killed somewhere between 20,000 - 50,000 of their own people. That's a huge number for a little island.

We anchored in Ramun Bay and were quickly warned to move in closer to the city. It seems the "rascals" are still armed from the war and like to get drunk and swarm. We moved immediately. I slept in the cockpit and Emelia ran an all night watch between their 4 on board. It wasn't my first choice in anchorages since we were in a tight channel where the currents ran at 5+ knots. You should have seen me trying to scrub the bottom. Almost impossible. But there were no incidents and we got away unscathed.

Suzi has perfected making rondele cheese from homemade yogurt. How cool is that? She makes yogurt from an Easiyo cylinder the beautiful Belinda Smith gave me years ago, then she "grafts", or "clones" the store bought stuff to keep the strain going with an adjunct of water and powdered milk, then from that she does some other stuff I don't understand involving a mozzy net as a cheese cloth, adds herbs, and voila - fantastic spreadable cheese!

This next invention of hers is even better: Taking a clue from Joshua Slocum, the first man to sail single handed around the world over 100 years ago, she bought a thin plastic place mat and glued thumbtacks thru it. At night we roll it out as a tortuous welcome mat for any "rascals" who want to come aboard.

Did you know she sews & paints our courtesy flags? Yep - she did Vanuatu, The Solomons and the PNG flag that we raised today. And she's not at all stuck up.

Do you realize that we eat only organic food? That's not because the locals go to the extra expense, or because we give a flip - It's because the 3rd world can't afford pesticides. The stuff we buy in the market is all grown in peoples back yards. Good stuff!

Melanesia will always remind me of the smell of toasting copra. If you don't know what I'm talking about then go to Wikipedia and check it out. It's sweet, and perfumed and everywhere.

3rd World - why can't they give directions? They never know the street name and they can't tell you if it's the 1st left or the 3rd left, only that it's left. Why?

Restaurants you'll never find: Panamanian, Costa Rican, Scandinavian, or Melanesian. This food is so despicable (except kokoda) that no one could ever patronize these cuisines except their own people.

We're motoring west at under 4 knots. We just paid over $9 per gallon for diesel and there is zero wind. If I sound like a crabby bastard then I blame it on the fuel price and the fact that under these conditions the trip to Kavieng is going to be extremely expensive. It's 330 miles away and it's supposedly a surf and dive mecca. We shall see. Suzi's pizza is almost ready, gotta go.