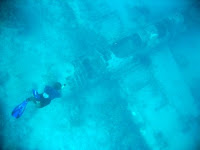 Hermit Island is in the Admiralty chain of islands. Jacque Cousteau listed it as one of his favorite spots on the planet. We'll be there in 6 hours.

But now I must back track.

I like Kavieng. I like it a lot. There are places where sailors will find an archipelago with hundreds of anchorages, protected waters, great snorkeling & diving, and within close proximity to an urban area in which to reprovision, & repair. Las Perlas Islands of Panama, the Vavu'a group of Tonga, the Mamanucas of Fiji - they all satisfy those requirements and so does Kavieng. The difference is, the others have been discovered, Kavieng is a jewel just waiting for a Moorings franchise or an episode of Survivor to ruin it. Check a map - it's on the top end of New Ireland in PNG. It's been a long time since I saw dolphins at anchor. Kavieng's aren't shy. Plus you get Japanese planes lying in 30 feet of clear water. It was a great spot. We ate giant crab claws the size of your fist, drank over priced beer at the Nusa Island Resort, hand fed a sea eagle a bait fish (the resort rescued it and it's now tame. It's the size of Paula Abdul with claws that could steal a pikinini - impressive), and bought more diesel. We also met some Indonesian's who had their fishing boat seized for illegal fishing. The one word of English they could speak was, "accident". Yea right. There wasn't a level deck on that whole boat. It was if it was designed to prohibit sleep of any form. I've seen lots of those boats along the way and they never acknowledged my hailing on the radio. Now I know why.

We left after refueling and anchored just a few miles away to rest up for the next leg of this trip, which is now underway. We should be making landfall today around 2pm, 3 days after we left. The entire trip has been calm. For some of it, we had nice winds and could sail, but for these last 40 miles we're going to motor. There's no wind and if we don't get in before dark we'll have to bob at sea all night waiting for first light.

Full sun and no wind mandate exceedingly hot days. We drag behind the boat to cool off, drink lots of cold water, and hide in what little shade there is, all to no effect. The sweating begins about 7:30 in the morning and doesn't stop until 5pm. Suzi gets mad if I accidentally touch her during daylight. That's why I blow a whistle at 5pm and pounce on her. You can probably imagine how well that goes over "wif me English bird". And yes - I've begun brushing up on my tortuously annoying accents again.

Timely Update: We made landfall about 4 hours ago. Maybe landfall is the wrong term. It looks like we're employees who work at Walmart, and have to park at the extreme outer limits of the parking lot. There really isn't any land around us. We've found a shallow patch in the middle of the ocean and have anchored in 36 feet of water inexplicably protected from swell by the fringing reef. This water is extremely clear. No wonder Jacque loved it so. The natives have already come to greet us. They promise lobster tomorrow. We caught a fish just as we were approaching the pass. Hunger or protein won't be a problem for some time. Now is the hour for easing into this SoCo hundy proof and choosing a movie after Suzi's hummus and my thrill seeking leap off the spreader.