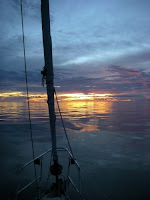 The Pacific Ocean covers 50% of the surface area of the entire globe. We entered the Sagewin Straight at 11:00 on the 15th of Nov. We'd timed the currents correctly and the flow pushed us along at 10.4 knots. At 13:48 on the 15th of Nov we'd exited the Pacific Ocean. From Panama City to Sorong, Indonesia, Suzi & I had crossed the largest ocean on the planet. We'd sailed more than 10,000 miles. Add to that the 4,000 miles of Pacific sailing from SD to Panama I'd done before she climbed aboard, and you can see that this boat and her passengers have put a lot of blue Pacific miles under this keel. In fact, as far as oceans go, I've really only known the Pacific. Now we are in the Indian Ocean, and things are a little different. More islands, more currents, no cyclones - but monsoons that baffle the hell out of me. I thought it felt exotic when we got to the South Pacific Islands; now we're in Asia.

"No one speaks English, and everything's broken". - Tom Waits

Sounds like hell huh? There is a cost to putting so many miles on this boat; it's disintegrating beneath our feet. The engine drools so much oil that I have to shut it down every 8 hours and add 2 "glugs". That's scientific right? The rudder and keel leak, the rig just won't tune correctly, and 2 weeks ago in the middle of a 350 mile passage the bilge started filling with water. I found where it was coming from - the anti siphon hose. Why would that be squirting water? I shut the engine down, pulled out every diesel book I have, and started speed reading as the sun went down on a bobbing Barraveigh with no wind to fill the flogging sails. (I ended up rerouted the hose to lead thru a hatch in the aft cabin, and then down the cockpit floor and out the scupper. I later fixed it by cleaning the valve. It works correctly again). A week ago the compressor on the fridge died. It's been reduced to a mere ice box. It's hard to find ice in the tropical 3rd world. Gone are the glorious meals Suzi would pull from that fridge. Gone are the cold drinks. We are becoming the 3rd world.

We'll make it to Bali. I'm sure I can coax another 1200 miles out of this old boat. Once there, we'll fix everything and head off again, but man am I sick of feeling vulnerable. The check list and the problem spots on the boat seem to increase each week. I remember when sailing used to be relaxing. Now, it's no fun at all. The thought of going to sea has become a constant worry in the pit of my stomach. This is a low point. I acknowledge that. I'll pull myself back to optimism, but you should know that this isn't an easy life. It's worth the struggles, but it's not an easy life. I long for a time when my only concerns were mowing the lawn, and driving to Quikilube for an oil change.

Oh the foods I've eaten: Mirone is a pancake with 40-50 whole anchovies fried into it. I could only eat ½. I'd satisfied my salt quotient for the day & just prior I had eaten a squid ball. It took me 20 minutes of chewing and my jaw was finished. When it's a meat dish I ask, "What sound does the animal make?" They are embarrassed to bark, so instead, they mime a dog in repose. The gesture is the best part, cuz dog, to me, tastes too strong to enjoy. At least you aren't stepping in dog crap on the streets; no strays. They serve cow brain, hoof, and fried skin, among 100 other dishes. The other dishes are delicious, and remember - it's really inexpensive.

Toast us for crossing the Pac, and wish us luck in reaching Bali,