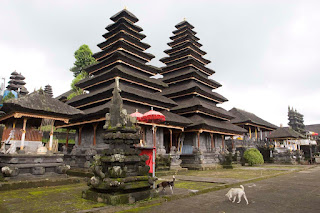 Infrastructure At Cut Rate Prices
The urban conglomerate that is the southern portion of Bali is a rare prize. It's a prize because it has a village mentality with a city infrastructure. From Denpasar to the northern reaches of Bukit and from Kuta on the west and Benoa (where I live) on the east, the city offers hole-in-the-wall warungs (a place to eat) to high dollar resorts. You can eat nasi campur and drink an ice cold Coke for the equivalent of $1.50 (the Coke is always the most expensive component), or you can sip an $11 cocktail at Kudeta. There is no shortage of dining, drinking or lodging establishments. In fact – there is such an over abundance that the choices seem to never run out. You can go to a western deli and see all your favorite cheeses under the refrigerated glass, or you can ride the public transport (bemo) for 20 cents. You can join a gym (I did, and it's the most modern I've ever seen) for $30 a month, buy pirated movies that are still in the theatres for $1, rent a car for $140 a month, or stay in a private room for the night just cuz you drank too much and can't make it back to the boat. It costs about $9. You can hire a hard worker to scrub the decks in the hot sun for $13 a day while you wifi from the air conditioned innards of a sailboat. You can talk on your own mobile phone for a penny a minute.

Cheap equals autonomy.
Affordable means freedom. I can afford to not have to share a room as I tour the island. I can afford to travel in a comfortable fashion all by myself. I can buy and rent the material possessions that grant me access to the real Bali. I can drive to villages that don't exist on the driven route of air conditioned monster buses packed with Korean tourists who are "doing" Bali in 5 days. Exploration is access, and access costs, but this place is penetrable even on a thin budget. Bali – it's a deep discount all access pass. E-ticket baby! I love this place.

A Brief Religious Note
Indonesia is an Islamic Nation, the largest in the world actually. However, the island of Bali is overwhelmingly Hindu. Not exactly the kind of Hindu that originally came from India. Close, but it has mutated some differences. You won't see dots on foreheads or saris. You will see puras (temples) everywhere. Seriously – EVERYWHERE. It's beautiful on a level that is hard to describe. These people pay attention to detail to a degree that I haven't seen in other cultures. I believe it's because their religion is so detail specific that they are patient on a rank that most of us can't fathom. It's this detail that shows forth in their architecture, their dress, their cuisine. They simply appreciate beauty.

Hindu Magic Force Field
Driving in Bali is an adventure everyday. Start the car and test the horn. You're gonna need it. Merging into traffic on this island is tantamount to holding your breath and jumping headlong into a swift river. The cars and motorcycles ultimately do part like a school of fish interrupted by your rude introduction, and I've yet to hear the crunch of plastic or the grind of metal. Just before driving straight into the mass, which looks like a guaranteed collision, I say out loud 3 times, "Hindu magic force field." It works. I wouldn't recommend it back in the States.

Return Of The Mods
These are scooter people. The vast majority can't afford cars so the country is flooded with scooters. If you ever wondered what happened to all those cool Vespas from the 70's & 80's, they're here. I've witnessed a family of 5 on 1 scooter a couple of times. It's common to see 3 or 4 people on each scooter, and in my experience the kids are usually sound asleep with their parents hanging on to them so they don't fall off into the traffic. Can you imagine if we made Dianne Miller leave Orange County and stand at the central roundabout and witness all the potential kiddy death? Within 1 hour she'd be carted away in a straightjacket. I haven't seen a child car seat in 3 years.

"This local girl showed me the scars from the bomb blast and she lived blocks away"
Bomb check! – When you enter the marina, any resorts, or the high dollar malls - the guards have a big mirror on the end of a pole that they use to check under the car for explosives. In 2002 and again in 2005 the Muslim extremists touched off bombs designed to kill the infidels in action packed Kuta. It worked. They killed and maimed lots of people from all over the globe. The men who were caught and held responsible for the crime were executed a few months ago. Will it happen again? Let's put it this way – young Muslim girls are earning money for new cell phones by giving hand jobs in massage parlors. When she comes home with her new phone, daddy Mustafa is going to ask a lot of questions. When he finally hears the truth, how do you think he is going to feel about the "Bules" (Whites) living in his country? This trip has taught me that EVERYTHING is relative. By comparison, we are immoral infidels.

The Currency and the Candy
The exchange rate is about 12,000 Rupiahs to the Dollar. Too many zeros make it difficult to give exact change. So when they can't, they give you candy to make up the difference as an apology. It's a fitting example of the sweetness found in a Balinese act of contrition.

The Guessing Game
There is an intersection north of Denpasar that is almost impossible to time. No one ever hits the green light and the Newspaper men know this. They wait on the side of the road with a stack of international newspapers draped over their arm. They have about 1 second to guess what nationality the driver is so they can bring that specific paper with its headline to the top of the pile. I've been guessed to be French, German and Australian. They keep shuffling as I shake my head. Finally the USA Today is pushed against the window. I gotta admit, it looks rather bleak back home, and I can't bring myself to buy it.

There Is A City Called Ubud
Near the center of Bali, in the high cool hills, there is a city called Ubud. It's the Mecca of meditation, massages without sex, art, poetry, cosmic energy & spirituality. There is a lot of blissed out smiling, but I don't remember ever hearing any laughter. It's where people who can't surf, tan or drink go to find community. It's not your typical idea of an Aussie vacationland. It's not the beaches of Kuta. It is, however, a viable alternative to the usual distractions of Western decadence. I endorse it. Plus – it's a great place to feed bananas to aggressive monkeys in a moss-covered-jungle-hidden-Hindu-temple.

Ivan The Tourist
When did Russians start traveling? Is this place so cheap or is their economy strong enough that they can finally afford it? Whenever I see a rich Russian I want to ask him how many men he's killed. If you ever get depressed, ask a Russian to show you their childhood photo album.

Yo Hablo Espanol
You can tell who the long time cruisers are cuz even though they're white; they speak Spanish to each other when they don't want the locals to understand. Spending all that time in Spanish America paid off.

Suzi Departs
I believe that everything has an expiration date. Suzi and I reached ours. The specifics are unimportant and will be forgotten over time. What will remain is the fact that this woman shared 2 years of my life and sailed half way around the world with me. Her place in my history book is secure. She returned to London on Jan 10th. I have said once before that everything dies a premature death on a sea going boat. It still holds true. I feel sad, I feel liberated, we move on. She'll move back into her flat, rejoin the London Metropolitan Police force, and meet a man who can be a better partner. As for me – my selfish ego trip will continue. The next page is about to be turned . . .

On March 18th 2009 I get on a plane and I fly to Tokyo. The plan is to live with my brother, earn money, write and soak up another culture. Barraveigh will wait for me in the slip in Bali. I'll eventually return to her, get her ready for the next leg, and then head up to Borneo, Singapore, Malaysia and Thailand.

I'm writing the story of my life by living it. The construction of my biography is forged with every choice I make. I'm grateful you find it worth reading.

Capt Bobby
Posted by Bobby at 2:58 AM No comments: