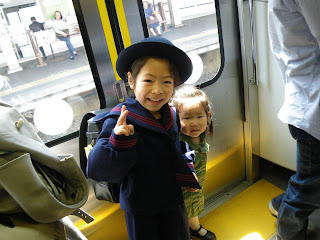 Hand on the Door

I am standing on the threshold of a new experience. I feel fear and elation. Tokyo is the largest city on the planet. It's intimidating and inexhaustible. In that respect, it's the same as the Ocean, but that's where the similarities end. This congestion of concrete and people is the exact opposite from the sparseness of the Sea.


There have been other changes as well - I went from soaked with sweat by 10 am to wearing 2 layers of fleece and freezing. 3 years in the tropics has thinned my blood. I swapped hemispheres and my entire wardrobe.

Because my mother visited my brother here 2 years ago, she told me to hold onto his belt loop whenever we went out in public. I thought that was a little paranoid. On the 2nd day after I arrived, we were on a train and I stood up a little slower than Skinny. Before the door opened there was 1 person in between us. The door opened and with the crush of humanity we moved off the train, suddenly there were 10 people in between us. We turned a corner and more arteries of congestion merged into ours. There were now 30 people in between us. As we jostled through the bottle-neck at the escalator the distance increased. There were now 60 people in between us. With every fusion the space increased. I kept my eyes on his curly hair and caught up to him as he waited near a column in the station. It created a human eddy and allowed the currents of people to flow around us. I grabbed his belt loop.

We call him Skinny, my only sibling. Amateur: musician, magician, comedian, interior decorator and Japanese man…"but anything else you hear is a filthy lie." He likes to "pish in Yiddish & sneeze in Japanese." He's 2 years younger, 2 inches taller and he isn't ever going bald. For those of you who know us both, I'm sure you'd agree that he's the interesting one. His most recent masterpiece is entitled "TigerLand".


Our Habitat from Humanity

It seems I can't escape the jungle. He has built out his apartment to resemble a bamboo rainforest. He has palm trees, coconuts, vines, moss, 6 foot bushes, flagstones, fake grass, and a pond. That's just on the inside! In addition, there are traditional Japanese woven Tatami mats and sliding rice panel doors. It's wonderful. People drop by just to show it off to their friends. It should be on the UNESCO World Heritage list. I sleep on a convertible futon that is swathed in tiger print. He sleeps inside a closet that is also covered in tiger skins. It seems we're still playing "fort". He in his habitrail, and me in my boat.

In the city of Tokyo, there is a cartoon cat that dictates all the rules to follow. "Don't park your bike here." "Don't get your fingers stuck in the closing door." "Stand on this side, walk on that side." It's Hello Kitty! Yes - Hello Kitty literally guides you in your daily life. It's as if Mickey Mouse was a law enforcement officer.


I Can Speak Engrish!

I haven't had a job in over 4 years or a job interview in over 15 years. One of the reasons I'm here is to earn money. My first interview was a dismal failure. I was overwhelmed and underwhelming. I wouldn't have hired me either. I'll get better at the process. What is the position I'm applying for? Well – that would be English teacher of course. It seems I learned a marketable skill at a young age. The problem is; there are a lot of other people in Tokyo trying to sell it as well.

Your fish out of water,

Oh, and I'm sure there's no boozin going on either...sounds like that wouldn't be a good idea while trekking through that sea of humanity. God that sounds annoying!

love this one.
bt the dispatch chapter is still my fav.
encore mr.guling.