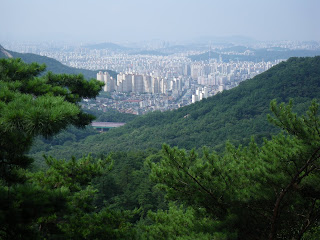 The first clue that Korea was going to be a little different was when the airline stewardess announced just before we landed that it is forbidden to take aerial photos of the country. The war never officially ended. It has just been left as a cease fire for 46 years. The term they use in written documents is “armistice”. North Korea unilaterally withdrew from the armistice on May 27 2009. Did my brother and I possibly choose a dangerous time to come to Korea?

Everyone wants to hear the scary before the serene. “What was the worst passage you ever had? “How big were the seas?” I will now accommodate your terror lust.

DMZ stands for Demilitarized Zone. It’s roughly the 38th parallel. This is the “no man’s land” that separates the North from the South. In 1974 the South Koreans were alerted by a defector who told them about a tunnel being dug to invade their country. It took 4 years for the tunnel to reach the no man’s land where the soldiers in the South could detect it. They bored holes and ran sleeves of PVC pipes into the holes. They filled the pipes with water and waited for a gusher. When the underground explosions that the Northerners were using to dislodge the granite went off near the pipes, the water would jump out with the concussion. They knew the tunnel was getting closer. The South kept boring holes and filling them with water until they bored one that wouldn’t fill no matter how much water went in. Bingo – they had found the tunnel! The Northerners retreated and painted the walls black as they abandoned years of work. Why paint the walls black? They knew they were caught, and when the tunnel was examined, they tried to say it was an old coal mine. When that was laughed at by the international community, they then had the audacity to say that the South dug it in prep for invading the North. However, the angle of the bore holes for the dynamite charges prove it originated in the North. Here’s the shocking bit: that was the 3rd tunnel that they’d found. The tunnel was wide enough for 30,000 heavily armed troops to run through every hour (North Korea has the world’s 4th largest army. They weren’t going to stop after an hour)! The most recent tunnel was discovered in 1990. Think there might be more out there?

As for landmines, there are still 700,000 unaccounted for future leg amputations out there, and that’s just what the South knows about and hasn’t recovered. That heavily fortified border and the land block that the North serves as, has, for all practical purposes, made South Korea an island. They’ve been overrun by the Japanese many times, and now their own brothers have cut them off from overland travel. They’ve had it tough, but the South Koreans have persevered. Their economy is expanding in a recession and they are completely plugged in, or maybe the opposite – wirelessly connected, to the hilt.

We arrived exhausted. We had inflicted double helpings of self abuse upon ourselves in Tokyo. Bloodshot and with sugar levels dropping, we dumped our bags at The Bong House in Hyehwa and went up the street to the first bbq restaurant we found. The floor was covered in spackled pork fat. Cheers from the neighboring tables came regularly, and with gusto. Soju (their local rot gut) washes down the cholesterol and stokes the bravado. It was a friendly and raucous crowd. 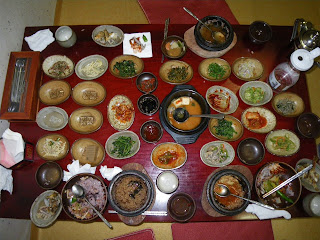 Korea - 2 forks, a pair of scissors, a set of tongs, but no knives. Here’s how it works and I’m angry at my own culture for having never figured this out: a fork in each hand is the perfected method for eating chicken. It makes taking the meat off the bones as easy as opening a Ziploc. As far as the scissors go – they pick up the beef or pork with the tongs and use an industrial strength pair of scissors to cut the meat into workable sizes. This is so simple and so much better than a knife. My knives, from this point forward, will be relegated to cutting ropes and shanking pirates.

We don’t speak a word of Korean, and hardly anyone speaks English. Our dining technique was to sit down, smile, shrug our shoulders, and then eat the delicious food that was served to us. I had no idea Korean food was so good. That was surprise number 1. 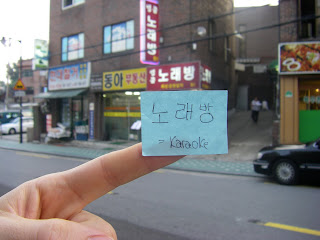 Seoul is a thoroughly modern city. It begs the comparison to Tokyo. Or maybe more aptly; Tokyo’s little brother. The subways are easy, it’s fairly inexpensive, and the infrastructure is sound. We did have a discussion about First world vs. Third world. Skinny and I came up with the following questions to ask oneself when trying to decide if a nation qualifies: 1.) Can you flush the toilet paper? 2.) Do members of congress have televised fights with each other? 3.) Can you drink the water? 4.) Is the electrical up to code? I’m not sure South Korea is going to be expanding into the G9 in any hurry but that’s just fine with me. I actually prefer the 3rd. 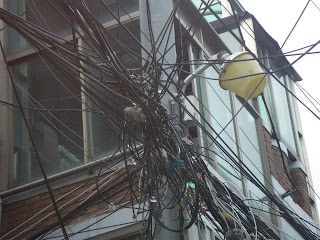 Surprise number 2 was how friendly the people are. It’s been said that the Japanese are like the English in their repressed state, and the Koreans are more like the Americans. The girls are pretty, the guys are fun, the city is exciting and we had a great time.

Surprise number 3 was this cute girl that I met named Megan from Oklahoma, USA. Remember that name. I have a feeling it might pop up again.

Korea – I give it 2 thumbs up and a big gold star. Get there, you won’t be disappointed.