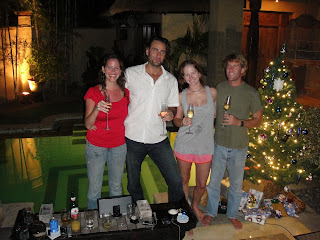 I love the “off season”. Fewer tourists, prices are lower, rooms are always available. That wasn’t the case when Megan and I returned to Bali on Dec 22nd. The hordes were on vacation and we were now just 2 of the same, thrown in amongst them. We spent Xmas at my friend Misha’s villa in Sanur with his sister Anya. It’s a hidden little sanctuary tucked into a private corner of a sleepy beach town, safe from the retired Dutch. Anya cooked, we drank, and late night swimming did occur. 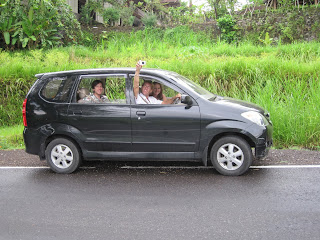 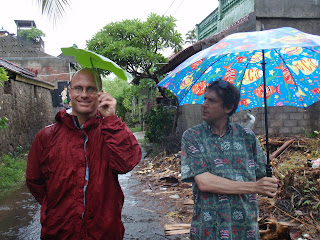 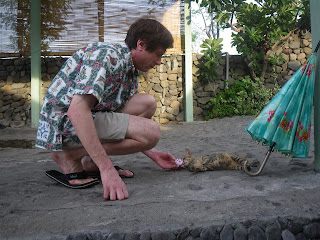 On Dec 28th my brother Skinny flew in from Tokyo and our college buddy Chris Miller “the fish killer” arrived from California. We toured the island, and emptied more than our share of green bumpers of Bintang. No one can walk as fast as my brother or stay up as late. The kid is a speed walking insomniac. He had what we called a “Meow Machine”. It was a pocket sized device, that when pressed emitted a perfect pitch recreation of a cat’s meow. He was a huge hit with all felines within his vicinity. Chris tells the story of one very late night in Lovina when Skinny couldn’t work the key to get back in the room and the cat’s meow kept going off in his pocket. Chris overheard him from the other side of the door cursing the pack of cats he was sure was attacking him. 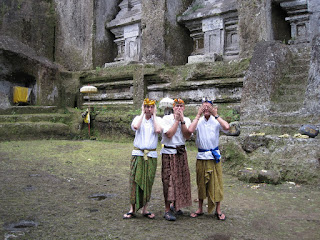 Fortunately – Chris never does anything unusual and is the voice of reason. Those 2 were roommates back in their dorm days of ASU. What a pair.
Welcome to 2010! 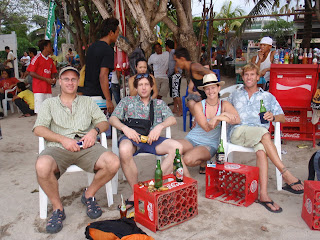 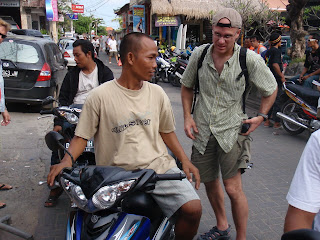 We spent New Year’s Eve in the chaotic crush of people that is Kuta beach. The sheer mass of humanity reached new highs on that night. Traffic was so bad we abandoned the car and hired scooter taxis; “ojeks” to drive us around. The US embassy had issued a high level warning for bomb threats, but I hadn’t checked my email that day. None went off, and besides, we were safely back on Barraveigh before midnight anyway. New Year’s Eve has always been “rookie night out”. We toasted the new decade with a shot of good whisky and called it a night. 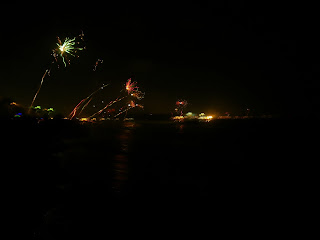 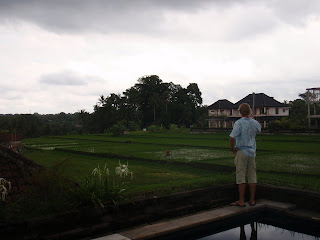 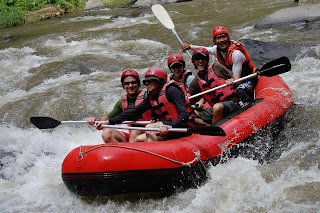 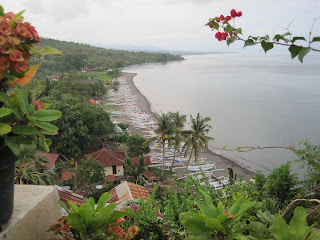 Ubud is always a pleasant spot to pass the days, and although I’ve now been there many times, I still enjoy it. We went river rafting and it received rave reviews from all 4 of us. Hani gives the best massages on the island and I know a place that has a pool on the roof with stunning views of rice paddies. It’s good to be a regular. 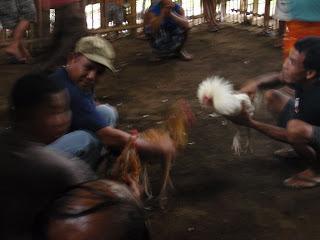 One of the lowlights was a “cockfight” we witnessed in Amed. There is nothing to do in Amed except swat flies and snorkel. At least no one is trying to sell you a sarong or “transport”. (Can you tell the shine of Bali has finally worn off for me?) It was violent, cruel and repulsive. One death was too much. We left nearly immediately and it wasn’t soon enough. The next time someone tries to entice me with a chicken fight I’m going to agree, and then upon arrival I’m going to make him wear a chicken suit and fight 10 chickens. I’d pay extra for that.
Barraveigh Leaves the Marina 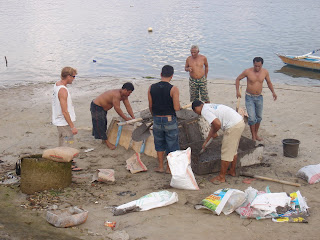 Chris and my brother flew away on the 10th and 11th of January. A couple of days later, Megan and I motored Barraveigh out of the marina that Suzi and I had sailed her into exactly 1 year before. I just took her up the coast about 5 miles to a safe anchorage called Sarangan. 3 months before, I had paid a local man to build me a mooring and made numerous trips to witness the construction. I even got to choose the spot in which it was deployed. The thing weighs 2 tons, is sitting buried under a meter of mud, all the tackle is brand new and completely oversized. Barraveigh will be very safe tugging on my new mooring. Who says paradise is no longer affordable? I bought 2 square meters of mud in a protected bay and with the community leaders blessing – I own it outright for eternity. It cost $400.
Back to Work – With Perks 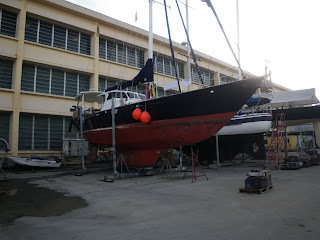 Megan and I flew back to Singapore on January 15th. As you may remember – I am managing the refit of Seacomber while she sits in the boatyard. Not the most pleasant of locales for an ocean crossing lady, but hopefully she will splashdown with her new coat of paint and internal upgrades on April Fool’s day. In the mean time – Megan and I leave for a 2 week vacation in Cambodia on Feb 9th. More on that in the next dispatch.

Just collecting stamps in my passport,

Email ThisBlogThis!Share to TwitterShare to FacebookShare to Pinterest
Labels: Bali

OMG, Skinny's expression on the river raft is priceless! I hope he checked his shorts afterward. LMFAO!