Cambodia Part 2 - I Love Those Elephants! 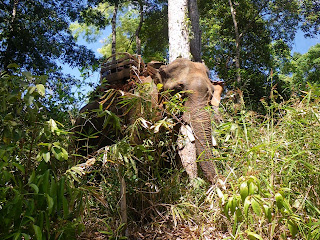 Pack a bag, it's Pachyderm time

A miserable bus ride makes for an even more joyful arrival. We disembarked in a red dirt town that had one main street that looked just like Carson City 1887. Sem Monorem is the capital of the Modulkiri province. This is the wild eastern frontier that borders Vietnam. We came for the elephants.


Our elephant’s name was Nam Koon, but we called him Mr. Baggy Pajamas. He’s a working elephant. That means he hauls lumber in the jungle until some tourists show up in this godforsaken dustbowl of a town and cough up the money to rent him. Here’s what I learned about elephants: 1.) They are extremely graceful. They can maneuver their enormous bodies through the tightest openings in the jungle flooring. 2.) They are incredibly strong. The elephant’s owner is Chranh. When he says “Mai Pai”, MBP renders useless whatever obstacle is in our way. He rips it out by grasping it with his trunk, shoves it out of the way using his head as a bulldozer, or crushes it beneath his feet. 3.) MBP loves Nature Valley Granola bars. When we ran out, he roared like Tarzan and peed his pajamas in rage. I’m guessing his message was something along the lines of, “That was the best thing I’ve ever put in my mouth. Don’t you dare tell me you ran out!” 4.) An elephant eats 23 hours a day and sleeps for only 1. 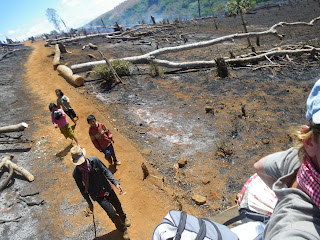 At this point you need to know that the Cambodian’s have their own alphabet. It looks nothing like ours. I can’t even begin to understand it. Further – they make sounds that my nasal passages won’t permit. Given enough time I can learn anything, but remember – I’m a “weeker” now. 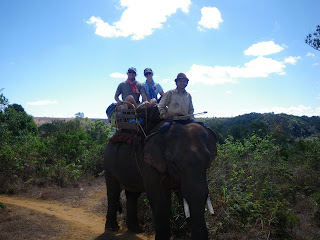 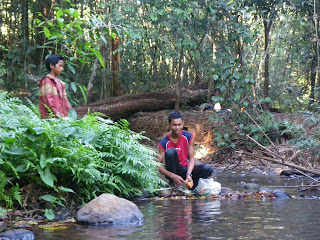 Changrom was the man I spoke to on the phone when I called from Phnom Penh. He wasn’t the lowest price but his English was better than the others I spoke to. I told him I’d agree to his price ($120 for 2 people for 2 days with food & hammocks included. They use US currency) if he accompanied us the whole time. He did. He walked behind MBP for 2 days. As an added bonus, Phnong or Flak (we were never sure what his name was); who is the elephant owner’s 9 year old son, tagged along on foot for those 2 days as well. That kid never spoke to us. I don’t think he even spoke to his dad. I did hear him singing to himself once, so I know he isn’t mute. They belong to one of the minority clans of people called the Phnong. Wait – now that I see it in print - I thought that was the kid’s name. No one really speaks English and they just give you the quickest & easiest response to any question. Damn it! I actually thought we were communicating. Guess not. Talk about being an ugly American – Not only did I call that kid by the wrong name for 2 days, but because I can’t really differentiate their “ch” sound from their “tr” sound, I changed his dad’s name from “Chranh” to “Jurong” (it’s the mall closest to us in Singapore. Someone should just cane me now). It gets worse – I got tired of guessing whether it was “Changrom” or “Chamrong” or “Trangrum” or whatever the “walk behind guys” name was, so I renamed him Ron. “You will now be called Ron”. He was fine with that. 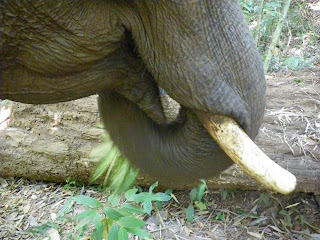 We stopped for lunch and Chranh anchored the elephant. Just like me, he uses 3/8 inch chain and drops it right off the big boys shoulder in the same way I use my bow roller. He ties one end to his ankle and the other to a tree. Getting off and on the elephant necessitates finding a fallen tree to climb. Mr. Baggy Pajamas won’t hoist you onto his back with his trunk even if you offer to pay extra.

We ate beside a river and snoozed in the shade while the elephant ate everything in his radius. We climbed back in our box and pushed on. His lumbering motion takes some getting used to, so we rearranged our nest and settled in for the trail ride. I’m not sure if we were lost, if Chranh likes to blaze trails, or if the jungle just grows back that quickly, but MBP had to smash our way through the lower canopy. He was very “passenger conscious” and exercised courtesy in not ducking a branch and wiping us clean off his back, which is exactly what I would have done if 3 humans were riding on me. Occasionally the owner would reward him by allowing him to stop and annihilate some banana trees. Chranh says he likes bamboo leaves and banana tree stalks the best. Those do seem to be his favorites when he can’t get Nature Valley Granola bars. 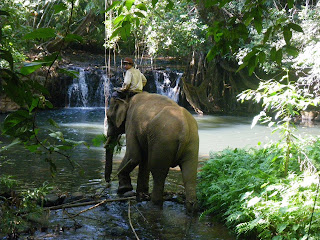 We stopped to make camp for the night by a beautiful waterfall and swimming hole. The men cooked and the silent kid with the mystery name washed all the dishes. As the sun dipped lower, Chranh prepared MBP for the night. He “hobbles” the elephant by putting a figure eight device made of rattan around his front 2 feet. MBP then just shuffles around breaking and eating everything green, and it’s all green. First thing he does is rip the top off the bamboo branch and use it as a fly swatter on his flanks and underside. He then discards the self flagellating device and gets to work stripping the leaves. I pick up the swatter and smote his flies for him. We have a relationship.

I awoke in my hammock a couple times throughout the night due to the ferocious cracking of giant tree limbs. I smiled as I remembered where I was, and then drifted back to sleep happily dreaming of a hungry pachyderm. If only I had more granola bars. 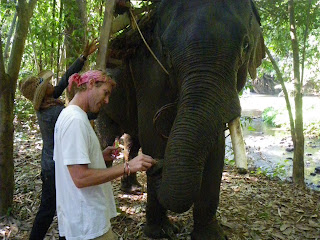 They tracked him the next morning by following the drag mark the chain leaves on the jungle floor. Before we saddled up, the owner bathed him in the swimming hole. Here’s the video of MBP getting a bath. The photos are of a different elephant with some French girls that we met on the bank of a river. Damn tourists are everywhere. 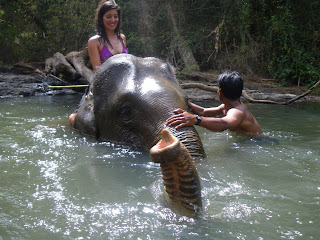 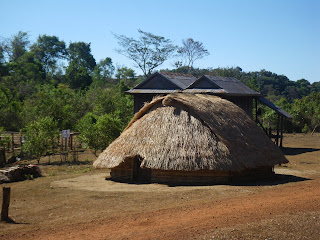 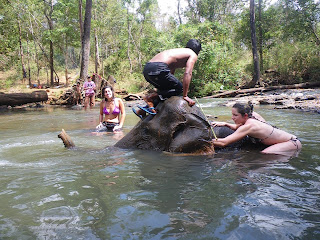 GoodBye to MBP
We returned to MBP’s dusty village of round houses that looked like Navajo Hogan. We said our goodbyes as we stared one last time into that giant eye. The overnight elephant trek was a brass ring experience that’s better than any circus you could ever go to. I highly recommend it.
Before we left Sem Monorem we spoke to an ex-pat who told us how horrible it is to ride the elephants. After listening to his reasoning I’m sure he’s right. You should never ride an elephant. I cannot recommend it. We kept our mouths shut and asked about worse criminals. I wanted to know about the murderers who live amongst him and how they live with what they did in the 1970’s. His answer was brief and stark, “They survived by learning to lie, cheat and steal. They still do.” We abused an elephant and tortured the names of our guests. In the history of Cambodian offences – we’re practically civic heroes.
In Conclusion

As I read what I have written here, and in the previous dispatch about Cambodia, I think I am coming to the conclusion that it might be one of those places on earth that will break ones heart, while compelling one to marvel at the resilience of the human spirit. I won the lottery at birth in so many ways, and these people have been on the losing end of history for most of their lives, but they persevere. What else can they do? They struggle and suffer but they hold out hope that the future will improve. And it looks like it is improving.

From the red dirt of Cambodia to the sterile austerity of Singapore – It’s good to be back on a sailboat, even if it is parked in a boat yard.

Next Dispatch: Singapore – One Man’s Opinion

Email ThisBlogThis!Share to TwitterShare to FacebookShare to Pinterest
Labels: Cambodia

Thanks so much for the elephant story, really, I never thought I'd see an elephant given a bath.