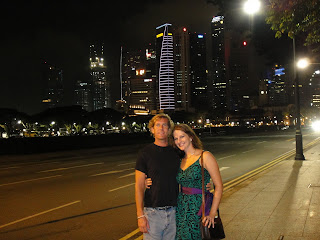 3. The Indian food is fantastic

4. Clarke Quay is a smashing hit

Having said that, unless one needs their boat repaired or conducts business in the Asian financial sector – I see no reason to go there. “Clean and safe” is tantamount to living in a coffin. I didn’t sign up for “clean and safe”. Give me weird and risky.

“Statistical Snapshot” or “Old Money vs. The New Rich” 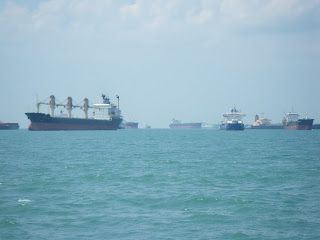 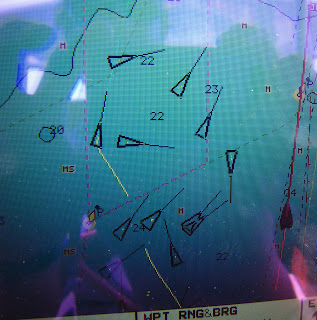 Now pay attention, this says a lot: It’s a city, it’s an island, and it’s a nation. Singapore, or Singapura - English translation: Lion City – 42% of the population is comprised of foreigners. They are an international shipping hub at the bottle neck of the Malacca Strait (Stamford Raffles had foresight). They’ve only been independent from Malaysia since 1965 . . . and they are rich . . .
Show me the Money!

Wealth is relative. Are you rich or are you poor? It depends on who you are standing next to. Singapore is surrounded on all sides by poverty stricken Southeast Asia. There is a water spectacle in the heart of the city, and it’s called the “Fountain of Wealth”. It trumpets its title of “World’s Largest Fountain”. Singapore is proud of its economic status amongst the poor nations of Asia and it has no problem rubbing their noses in it. No one likes a show off. 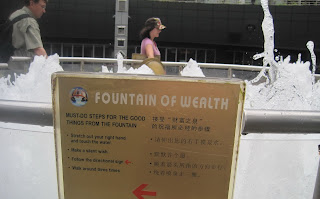 I haven’t lived in the first world for almost 5 years but Singapore qualifies in every way. It has infrastructure, real roads, mass transit, and sadly, very little corruption. The problem with the first world is that it’s not economically feasible to bribe officials. I miss that. Here’s my story:
In Bali when I had a traffic infraction and the cop would pull me over - I would bribe him the equivalent of $5. It happened more than once. In the States that would have cost me a day in traffic school, $200, and maybe points off my license with an increase in my insurance costs. Sometimes corruption can be a good thing. 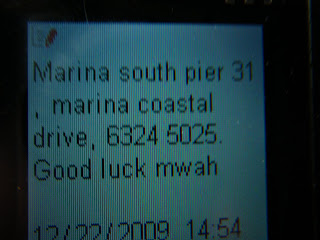 Apparently when you sail into Singapore and try to fly out the rules for the captain are different than the rules for the crew. Megan glided right through immigration while I was yanked to the side. I had to take a taxi to the immigration pier and was then told by the official that I needed to go back to the boat and get my crew list. I had 40 minutes before my flight lifted off. No problem. I know how to handle this. I pulled out my wad of money and turned on the charm. That got me nowhere. Then I peeled off a stack of bills and turned into the Ugly American. “I’m going to be on that plane. Let’s settle this now.” Nope. Not a chance. I’m lucky I didn’t end up in the brig. At that point I realized that I need to stop criticizing corruption and just admit that it works for the rich. Their wealth has greatly eliminated corruption. I suppose you can put that in the “good column”.

. . . Rest easy, they’ll never rule the world. There is a lubrication of commerce that the western world has realized that the Asian sector hasn’t even recognized yet. I must have called at least 30 businesses while I was there and not one of them answered with the name of the company, just “hello”. If you ask for someone and they aren’t there – their colleague will tell you to call back. Can you imagine that happening in the Western world? You would be fired immediately. The West is very adept at removing friction from business. Even as advanced as these Singaporeans are, they just haven’t figured out how to eliminate the hassle. I purchased thousands of dollars in new batteries and they wouldn’t take my credit card over the phone. The sales rep actually drove to the marina to pick me up and drive me to his office. It took them 5 seconds to swipe the card and we were back in the car and returning to the marina. I also found it easier to buy other items in the States and Australia, have them flown in, pay duty, and they were still cheaper and faster than buying the same items locally. Not to mention the customer service I received abroad vs. the comedy worthy exchanges I experienced with the Chinese overlords of Singapore, lah (they end every sentence with “lah”. Don’t ask).

Just because you know the phonetic letters doesn’t mean you speak English. I was listening to a Singaporean slaughter English and I thought, “Listen to what you are doing to my language.” Then I realized it wasn’t my language. My sentiment must be what a BBC Englishman feels when listening to an American or an Australian speak English. I now recognize that and here’s my public apology: “Sorry”. When I speak English to a non-native speaker, I slow down and I over enunciate. They won’t. The Singaporeans think they speak English. They don’t. They speak a hybrid pigeon English buttered with a thick coat of strong Mandarin inflection. It’s made even more frustrating by the speed at which they rattle it off their tongue. They either refuse to speak slower or can’t. I thought the Melanesian’s (Fiji not included) were handicapping their children by teaching them pigeon instead of proper English and it holds true for Singapore as well. 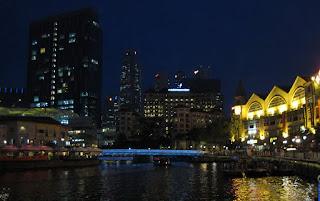 I never professed to be a civil engineer but as far as city planning goes, I think Singapore might have one of the best planned spaces in any metropolitan area when it comes to the example of Clark Quay. I thought I should put this paragraph at this juncture since I’m about to have my passport revoked for being an intolerant ugly American. I may not like Singapore but I do recognize something worth emulating when I see it. Sure, it’s soulless and much too expensive but they’ve earned their kudos for building the perfect wallet drainer.

“Why So Long In Singapore Bob”? 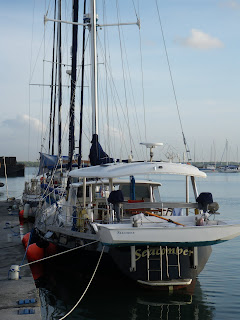 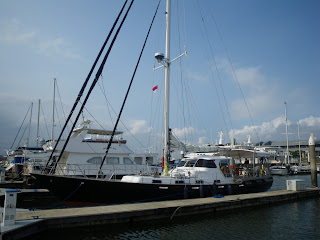 After much thought, I agreed.

Barraveigh is now for sale and I will continue around the world on the sailing vessel Seacomber. The details will be in the next dispatch. . . 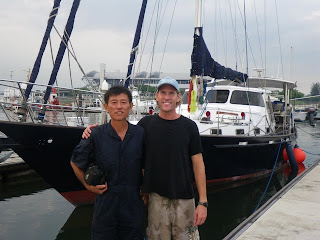 I would like to dedicate this dispatch to 2 people and a dog who made my time in Singapore bearable. Hock Keng - "CAN", Megan - My lovely Megan, and the Iggy dog - he and a cold beer at the end of the day made all the work worth it. His owners are pretty cool too. 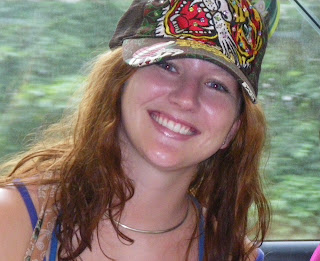 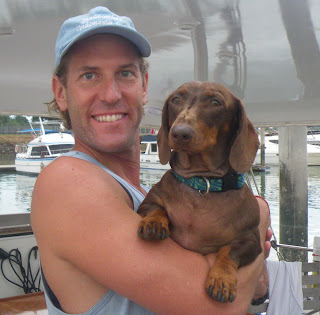 Email ThisBlogThis!Share to TwitterShare to FacebookShare to Pinterest
Labels: Singapore

Good to hear from you you! I thought maybe your blog posts were going to my spam folder, but no, you just weren't blogging!

Wow, she's a beaut!! Thanks for the update WT.

Enjoyed your "review" of Singapore, especially since I agree with you on every point. I loved it on my first trip and it was always a nice change from Jakarta, but I was always pretty bored after a day or two. KL is much more fun.

Glad to see that your adventures continue!

Bob, Thank you for this! It is beautifully written - informative and entertaining. Keep writing!
Leppy

Whitey, good to see an update. Keep that engine of corruption sputtering along!

You do realize you have a potential Bestseller here...think hard about a book deal. I have some contacts in the publishing industry, so when the time is right let me know if I can help.

First, however, make sure you have your blog content protected...back up all your writing on a hard drive or "safe harbor" it (pun intended) in some way. I don't know how Google Blogger operates, but from a legal standpoint you may not own the content. Just something to think about.

Continued luck (which of course we all know you don't need), and stay safe.