Putting The Miles On Seacomber

It was a pretty morning in Singapore, the city I hate, and I was happy to be leaving in 24 hours after working my hindquarters off for 6 months. I had the crew on board. The provisions were stored, the boat was in tip top shape and we were about to have a meeting regarding our departure the following day. Then Megan got the call. Her mother had been killed in a car accident. 24 hours later we were on a plane to Oklahoma. A week later I was back in Singapore with the same crew (Sam and Kelli) minus Megan.
﻿
﻿﻿
﻿

It was a fairly easy ride to Borneo, but once we turned south the winds grew stronger, the seas stood up tall and things got ugly. Seacomber would power up to 5 knots, stuff a wave that would bring a biblical flood all the way back to the doghouse and her speed would drop to 2 knots. Lather rinse repeat. For 4 days. It was horrible.
The humans survived but some systems on the boat drowned. The temp gauges, the generator, the shore power connection, an assortment of fuses, and my crew’s wanderlust for continuing on to Sulawesi all became causalities of what I will forever remember as “the submarine ride to Bali”. I was on my beloved Balinese island for only 10 days. I had to get the boat fixed, find new crew, and provision for months in the wilderness. Seacomber’s owners; my new bosses, were flying halfway around the world to meet me on a given date in a place I’d never been. The starter pistol had sounded and I was late off the blocks with a sore ankle.

Cornelius fixed the boat, Kelly did my shopping, and Misha kindly helped with all the rest. I hired Asis and Aso, two Indo sailors to crew to Palopo, my first landfall on the island of Sulawesi. Then I met Scott and Babs as they walked the dock at the marina. Scott is a professional chef and Babs works harder than anyone you’ve ever met and smiles the whole time. I’ve never eaten better food and I’ve never been so pleased with crew. If you want a great work ethic with a sense of humour (I put the “u” in there on purpose), draft the English. They gave me constant flashbacks of Suzi Roberts, that hard working culinary firebrand who looks great in a bikini (Megan ok’d this sentence. I pay my respects.)
﻿
﻿

Sulawesi, Here We Come
I love going to sea with the Brits on the fourth of July. We averaged about 3 knots up the Lombok Straight as we fought that fierce current all day. It got better as we made the turn east over the top of Lombok. Our first anchorage was Medang Island. It hovers over the big island of Sumbawa and is swaddled in plastic because the Indos love to throw everything into the sea. That’s when I began to build the list of the 5 rules. These became the mandates that Asis and Aso were to adhere to during our time together:

1. Bules (Pronounced “boolays”; their word for whites. It translates as, “albinos”) like very cold beer.

2. Bules don’t like it when you throw plastic in the ocean.

3. Bules don’t like it when you touch your ass. Use toilet paper!

4. Bules can die without air conditioning.

5. Bob doesn’t like it when you waste his rags.

I made them memorize the rules and would have them repeat them at random times just by calling out the number. This is how you win the hearts and minds of the native people. That, and paying them huge amounts in cash.

Aso stayed with us only until our first landfall on the island of Sulawesi. Asis remained with us for another 30 days, until after Gordon & Celia departed. Scott and Babs kept Asis company while Seacomber was anchored up a river and Megan and I got off the boat to meet Gordon & Celia in Tana Toraja for 5 days. 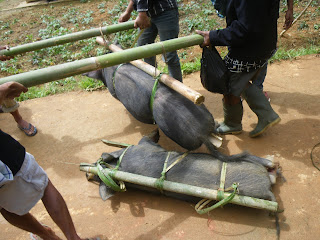 The call to prayer beats the roosters in this inland part of central Sulawesi. Although the Muslims are only 5% of the populace in this area, they never miss a chance to disrupt one’s sleep. It’s overwhelmingly Christian, which is an anomaly for Indonesia, because it holds the distinction of having the world’s largest Islamic population. Though these people are Christian in majority and in base principles, there are still the lingering animist rites that the blood lust culture of Tana Toraja has wholeheartedly embraced . Here’s how it works: Your loved one dies, you embalm them, and wait up to 10 years for everyone to save the money they will need to buy cows and pigs to torture and kill for the funeral. 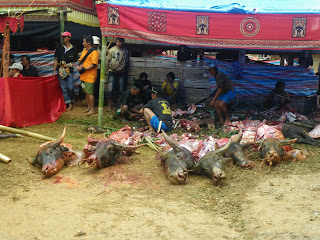 During the funeral, all the sacrifices from each family are noted in a book when they are presented for slaughter. When you attend someone elses funeral, you had better match or “one up” the offering in that book. Here’s the result: Perpetual poverty driven by these traditions that keep them in debt and unable to educate their children. They are so obsessed with death that they forget about life. Their focus becomes a death cult. Those debts that need to be repaid plus the funerals for their own loved ones cripple not only their futures but those of their children. Here’s the walk away statement: “Sure am glad I saw it. Even gladder it isn’t my culture.”
Life with the Boss 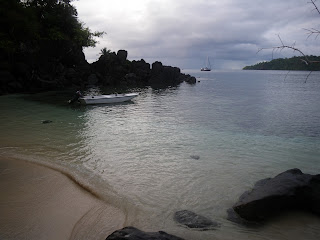 There isn’t much I can tell you. That doesn’t mean they aren’t interesting people, on the contrary, they are 2 of the most interesting people with the most astonishing stories you’ve ever heard, I just can’t tell you anything about them because they’ve asked me to respect their privacy. I can tell you that for all the wealth they must control, they are 2 of the most “down to earth” people one could ever meet. Celia cooks and cleans constantly, and Gordon climbs right into the engine room with me. They both insist on doing their night watches and are more sensitive to conserving water than even I am. 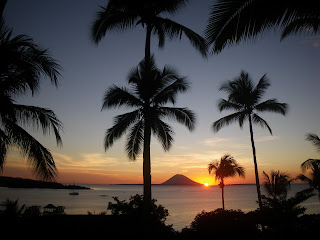 There was no wind. Each day we awoke early, motored until just before sunset, anchored Seacomber, and ate wonderful meals with delicious wine on the expansive poop deck. We discovered some beautiful anchorages and ended our time together in Manado, which is on the extreme northern tip of Sulawesi. It’s known for its diving. Take a gander:

As I write this it is Dec 1 2010. I sailed away from San Diego aboard Barraveigh on Dec 1 2005. 5 years on the water, let’s add it up: 2 boats, 2 girlfriends, countless crew, 19 countries, 18,000 miles, lots of injuries, 1 reconstructive surgery, zero tattoos, improved language and accent skills, and only 3 Reuben sandwiches. At the end of every year I ask myself, “Are you getting closer to being the guy you always wanted to be?” 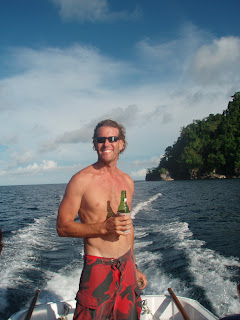