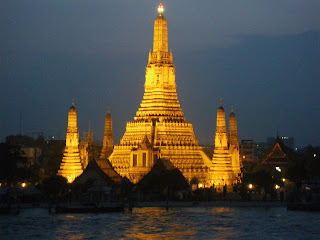 There are those languages which are crafted from the tongues of the gods. In my opinion, that would include Italian, Swedish and 3 of the 1,134 different versions of English. Thai can’t even stand in the same room with the runner up. In fact, it should be outlawed above a whisper. That’s my only negative. I want to be very clear about this – that is my only complaint; everything else about Thailand was over the top wonderful.
﻿
﻿ ﻿
﻿﻿﻿﻿﻿﻿﻿﻿
﻿﻿﻿﻿﻿﻿﻿﻿ ﻿

The alphabet looks like Sanskrit, Hebrew and the Zodiac Killer’s cipher thrown into a blender, and because it’s tonal you’ll never be able to pronounce it correctly. Use my time tested technique; repeat the same thing in English in ever increasing decibels. 1 of 2 things will happen; you’ll be understood, or given a free drink to leave the bar of your own accord. Either way, you’re a winner. 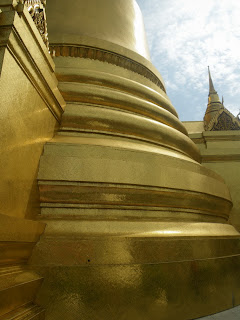 The Weekers
Mostly, I’m a dirty sailor, but every now and then I trade in my Mexican standoff with the sea for a backpack. Then, I become what I like to refer to as a “weeker”. Always spelled with a lower case “w” because I have no respect for the breed, though it is a sweet respite from the vulnerability I feel on the big salty. What’s a “weeker”? YOU are probably a “weeker”. You have 2 weeks, you fly somewhere, and you think you slipped right into the culture and learned something as an insider. As in “Oh yea, we did Cambodia. It was awesome!”
Megan and I did Thailand. It was awesome!

The backpacker uniform hasn’t changed in 20 + years. It’s essentially hippy chic with silly facial hair. You get extra credit now days for having dreadlocks, but they’re usually teased into existence instead of earned the disgusting way. Thank god for that, and for the disappearance of Patchouli. I hated that Woodstock stink. Birkenstocks have given way to Crocs and a shaved head is now as cool as a ponytail, maybe more so. Piercings and tattoos have grown in popularity and are as equally dumb as they used to be. Manu Chao replaced The Grateful Dead, and the Dutch are now challenging the Swedes for best looking humans. 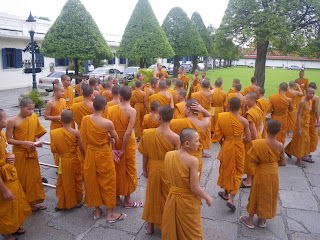 I lived out of a backpack 20 years ago. I did Europe, twice, both times with my buddy Jimmy Robinson. He’s all grown up now. He’s a paralegal in LA. He hasn’t aged a bit except for his hands. He’s got his Preferred Citizens Badge. I love that guy. That’s what travel does to travel partners; it welds you together. And the younger you are when you travel, the stronger the weld.
﻿
﻿ A wise man once warned; “all the feral backpackers have kennel cough.” In Thailand, lodging is so cheap, you’d be crazy to sleep in a dorm. Hot water and A/C cost a bit more, but not as much as Dengue Fever. Pay for the A/C, it keeps the skeeters out. 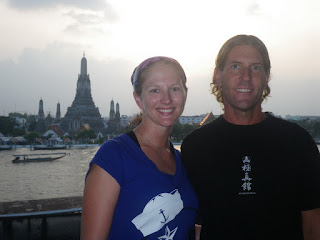 We started our trip in Bangkok. Grazing at the street vendor carts was a highlight. A sunset drink overlooking the river and Wat Arun was runner up. The main reason we were there was to get a new Indo social visa. The Indos waste one of my pages every 30 days. My passport has now had 2 additional reams of paper added to it and it’s as fat as a rich man’s wallet.

Essentially we took the “Capital Tour”. The current day capital is Bangkok, and then in receding chronological order the capitals were; Ayutthaya, Sukhothai, and pushing further back into history; Chiang Mai. 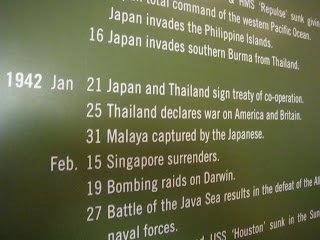 First we made a side trip to Kanchanaburi. This is the spot made famous by the movie, “The Bridge on the River Kwai” As with most historical movies, it’s an amalgam of many anecdotes from history but the bridge is there and the Japanese did enslave and work to death over 100,000 locals and Allied prisoners on the construction of the notorious Burma Railway. You won’t see any Japanese tourists there. It’s tough to walk the museum (the Aussies have done a fantastic job), and not hate.
Ayutthaya 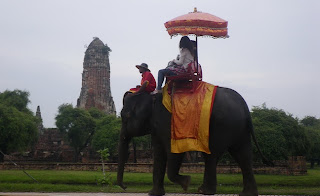 Ayutthaya is a collage of temples built on an inland island. Sounds impossible, but the rivers that surround the city create a “moat” and isolate it from the rest of the landmass. We sampled endless delicious food and walked temple after temple.
Sukhothai ﻿ ﻿﻿﻿ ﻿ 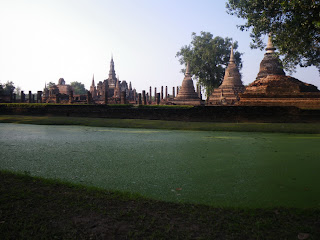 We arrived in Sukhothai after a long bus ride. You can get everything in the form of a shake: smoothies, lassies (a smoothie with yogurt), or any type of healthy fruit whip. They have perfected the art of blending and it heals everything, including long bus trips. Sukhothai is a park filled with ancient temples whereas Ayutthaya was more of an urban setting of temples. I love zipping around on a fast scooter while Megan holds on for dear life. After years on a sailboat, sometimes you just NEED to go fast. It was a fantastic place. We loved it and then we went to Chiang Mai.
﻿﻿ 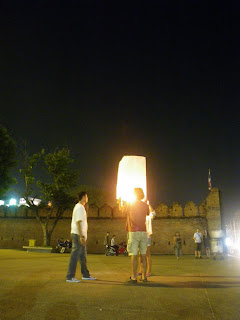 Chiang Mai
Chiang Mai was the best of Thailand (until we went to Pai). I can imagine that Ubud must have been this good before it became overrun with yoga gurus, healers, artists and Balinese wannabes (relax, you blissed out zombies, I still love Ubud).
Remember – we are moving back in time so the ruins in Chiang Mai are a little shorter, a little less preserved and in same cases, not much more than a wall around a city that though ancient, holds lots of future promise. 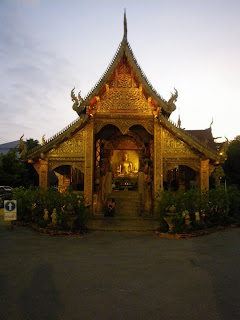 Saved The Best For Last 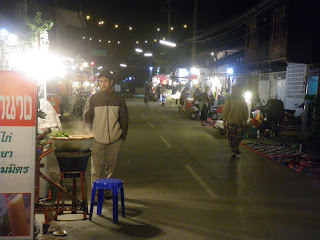 Pai – We needed jackets when we went out at night and asked for an extra blanket on the bed. I love being cold in the tropics. The rumors are true. Pai is fantastic.
Thailand vs. Indonesia
No contest. Indonesia isn’t even a contender. It would be a knockout in the first minute of the first round. All one can really do is compare Thailand to Bali.
Thailand – No blaring calls to prayer, Better roads and buses, better food, better temp in the north, no one selling sarongs, less litter, better vibe, less haggling, kind to strays, drinkable local booze.
Bali - Hinduism is a prettier religion than Buddhism, there’s surf in Bali, and the Indo Language is easier, but that’s it.
We’ll be sailing Seacomber toThailand in October!!
Your man on Point, Captain Bob
Posted by Bobby at 5:37 AM 4 comments: