We planned on 16 days for the Philippines and I was rather sure I would be bored and ready to go home after 10. I had never heard anything good about this island chain, and in fact, I knew 2 people who changed their flights and went home early. When we had only 1 day left I wished we could exchange it for another month. It was that good, and we traveled only Luzon, which is 1 of their 7,000+ islands.


We landed exhausted from a very early flight and a long day of travel. We checked into our squat in Manila for only 1 short night. It was tragically early the next morning, when we again caught a sunrise plane, this time to Legaspi, where we subsidized the other passengers in the minivan by paying for the 5 empty seats so as to get the show on the road NOW. Yep – we were in “weeker mode”. We had only 1 day to see the whale sharks of Donsol, and we did. The video’s a little shaky because I had to swim fast to keep up with the big boy but it’s worth a look:
Here’s how it works – The boat has a spotter who stands on the top pole and scans for the shadows of the whale sharks. They feed in the shallows on the masses of plankton that collect here every spring. When he spots one, he instructs the captain where to motor the boat. Upon hearing the shouts, our snorkel-man decides which side of the boat we should sit on in prep for our plunge. 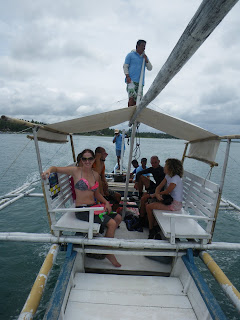 Once the boat has been placed in the path of the oncoming shark, the snorkel-man yells; “Jump!” We splash down and try not to get clobbered by the outrigger. We swim to the snorkel-man and he tells us when to stick our faces in the murky water – “NOW”, and there, just there, about 5 feet right in front of us is the looming open mouth of the whale shark coming right at us. It’s a heart racer. There’s only time to spit 1 expletive into your snorkel before the shark is half his body length past you, and the time to swim hard is realized. Once it’s past, we climb back in the boat and do it again. It was damn expensive but worth it. We got 4 great viewings and yes, I grabbed the shark. He psychically willed me to. Not my fault. I’m putting this experience down as a shark attack, and we, the humans, did the attacking.
The Cordillera – A.K.A  The Mountain Province


Every name starts with a “B” so it’s difficult to keep the cities straight: Bontoc, Banaue, Batad, Banga-an, Baguio, Bangao, Buscalan, Barlig, and Besao. Bontoc looks like Jerome AZ with rice paddies and banana trees. It has that antique mining town feel with vistas of sweeping bald hills. Bald, except for these gorgeous terraced rice paddies that are 2,000 years old.
We moved on to Segada; the only town that didn’t start with the letter “B”. It’s a little more western/hippy with good restaurants. The temperature was delightful, the people friendly as can be, the bus drivers let you sit on the top of their vehicles, and the terrorist group didn’t bother us at all.
﻿
﻿ 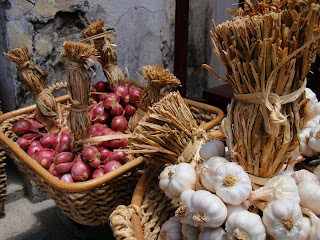 The New People’s Army (declared a terrorist organization by the EU and the USA), which is difficult to get anyone to talk about, is the armed wing of the Communist Party of the Philippines. I asked many people about the NPA and they all admitted its existence, but swore they didn’t personally know any members or their mission statement.
﻿
﻿

My assessment is that some of the people I asked were indeed NPA members themselves, and their agenda is to keep the government from meddling in their land affairs and to stop the destruction of their marijuana crops. They make a point to not let their revolution disrupt the tourist dollars. Smart little commies.
﻿﻿

﻿﻿﻿﻿﻿
In Banaue we paid a jeepney 300 pesos ($7) to drive us to the mountain pass they call “the saddle” where we would begin our trek to the village of Batad. This place is so remote you have to hike to get there. No roads, only a steep trail, and everything you consume down there, except the rice, is carried in on foot. It was a highlight of the trip, and with only 48 hours we didn’t have enough time to really enjoy all this area had to offer. We decided it was worth going back for, and we never decide to go back. 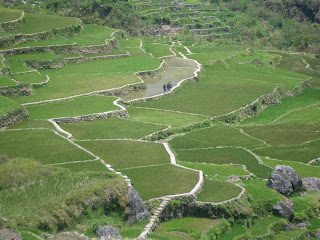 A Pageantry of Blood

﻿
﻿ We left the serenity of the mountain region to head south, to the sweltering heat and morass of swarming humanity that is the hell hole of San Fernando. This was Good Friday in the only country of Catholics in all of Asia. In this one town, they reenact the demise of their Lord in the streets every year. Torture becomes a tourist attraction. I witnessed it all for the low price of a blood stained shirt and a stolen camera.

﻿
﻿ We actually stayed in Angeles, which is the city that served Clark Air Force Base (It was a US base from 1903 - 1991. The Japanese captured it in early ’42, We took it back 3 years later, after it witnessed the Bataan death march. It served as the major staging area for the Vietnam War. The Philippinos wouldn’t renew our lease so we lowered the Stars and Stripes and left in 1991.) As you can imagine – any city that caters to the military has its share of vices. The only rooms we could find rented by the hour. Yes – we slept in a whore house, complete with strategically placed mirrors, a sex chair, and the worst cockroach and mosquito infestation I have ever seen. It was utterly revolting, but it helped prepare us for what we were to witness the next day.


The whole reason we were there was to witness what I can only call the insanity of religion. It was vulgarity on a level that made last night’s room seem wholesome. Enjoy these pix if you can. The best ones were stolen along with my camera by some slippery fingered old women who stood at a uniform height of 4’ 8”. 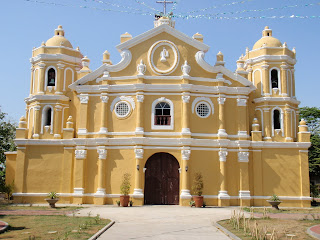 It was midnight in Vigan before I washed the blood off my legs from the mayhem that occurred 200 miles south. We felt as if we had escaped the whores and the horrors of Angeles and San Fernando.

These long night bus rides are a literal pain in the neck, but Vigan was a visually pleasing town of well preserved architecture from the Spanish colonial period. However – there was no reason to budget 4 days up there. An afternoon, in lowlight is all it deserves.

If you dig a little deeper you’ll find that the architectural style, though reported to be Spanish, is really more Mexican. It might be splitting hairs, but it’s interesting to note that the Galleon trade between Manila and Acapulco (1565 – 1815. That’s 250 years!) continued for so long that the Spaniards actually imported a hybrid of their culture after filtering it through their Mexican colonial landholdings. 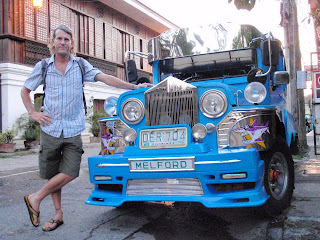 The Philippines: parts of it feel like America. After all, we had a strong presence here for almost 90 years. The roads feel like home; they drive on the right side, the signage is identical, the big 6 lanes of the highways remind me of our own, but the public transportation looks like it came from Panama. Interesting side note: The colorful buses used in Panama are actually old US school buses, and the buses used in the Philippines, which are called jeepneys, are obviously modeled after the US Jeeps . The world loves our vehicles; they just won’t buy them anymore.

Their level of English is higher than other countries in Asia, the malls look just like ours, and their approach to the service industry reminds me of home. 2 people can actually be served food at the same time – imagine that! Added bonus: the wall outlets are USA all the way.

A Really Big Knife, Customs, and a Missed Flight

I bought a huge knife in Banaue. They call it a “hanggap” in their local language. We packed it in Megan’s bag because we only paid for a checked bag on her ticket. When we landed in Singapore we had very little time to make our connection. Megan made the decision; “You run to the other terminal and try to make them wait for me. I’ll wait here for the bag.” She missed the flight. We met a few hours later at the Bali airport. Turns out the customs officers saw the huge knife on the x-ray and she was questioned about it. That knife originally cost me $13. After the missed flight: $134.

Go to the Philippines. We rank it very high amongst the Asian countries in terms of a vacation. The prices are affordable and the Americans bestowed upon them an elevated level of English and infrastructure that reduce the travel hassles. Just remember to bring your own inflatable/portable toilet seat because they’re hard to find. 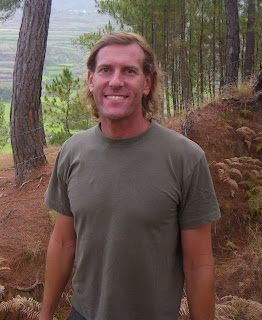 Email ThisBlogThis!Share to TwitterShare to FacebookShare to Pinterest
Labels: Philippines

A buddy of mine mentioned he was thinking about moving to the Philippines a week or so ago. I thought he was nuts until I read this. I'm considering it for the beer prices alone.

As usual a true delight to share in your adventures! You two take care of each other and Travel Light :)

Hey Bob...thermometer hit 107 degrees today in Phoenix...wonder if your Phillipine travels had any extreme weather days like AZ? Be safe and look forward to your next installment in the ongoing adventures.