The Cruel Roads of Mexico

You never want to drive at night in Mexico. Never. Just accept that and don’t make me go into a full chapter on how to scare my mom. Having adopted that as a maxim, I always start before noon. About 5 hours of driving Elsie on the roads of Mexico is all one can stand. It’s exhausting. No one would ever call driving a Ford F 250 with an oversized cab over camper plus these 2 ridiculous boxes (they add 3 feet of length and love to clip buildings and cars and anything else that is in my “turning radius of destruction”); RELAXING. 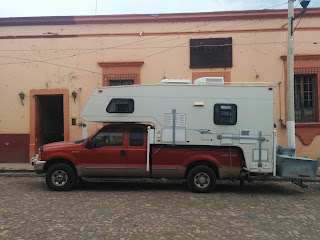 The Mexican driving experience is an exercise in non-stop vigilance. I am constantly scanning for pot holes, low hanging wires or trees, other drivers, “whoopty-doos” and topes (Speed bumps. They love to keep them unpainted so the suspension expert in town can feed his family). At the end of my 5 hours my neck is killing me and my eyes are about to bleed. I don’t think I even blink. My range is about 150 miles per day. Bad things happen when I drive over 30 mph. The roads are so bad that my reaction time isn't safe over 30 mph. Stupid huh? 5 hours at 30 mph = a range of 150 miles.
I have a toothpick that fits the scale of my map perfectly and I roll it around looking for my next town. Yea, I'm complaining, But I can take it. I've got plenty of time and I like the challenge.


I like almost everything about Mexico. Almost everything. I do take issue with their lack of sensitivity to peace and quiet. Trucks drive around all day blasting pre-taped sales pitches from loud speakers on the cab rooftop. Purified water, or seafood, or propane - It’s nice that they still make home delivers for nearly everything, but it can get irritating. In Indo it was the mosques with the loud speakers. Here it’s the churches with their early bells. Both will wake you before 6am. Religion is bad for my sleep. And then there is Norteno. Do you know what Norteno music is? – It’s the 3rd worst music in the world behind Gamelan of Bali and anything you hear in Viet Nam. It abuses an accordion and a tuba. Click here for the 3rd Worst Music In The World Sounds like German Oom-pa-pa, but even more ridiculous. I keep waiting for the clown with the huge shoes to appear and start blowing up balloons. It’s unbearable. Even if you like riding carousels with calliope music this Mexican polka crap is a crime against humanity, which is made even worse by their blown out speakers turned up to 11.  But that’s it. I’m only complaining about the auditory assaults. I like everything else.

If I reported only the pleasantries you would quickly flush me out as a fraud. Please know that although there are plenty of gorgeous sunsets with warm water lapping at my toes and a cold drink in my hand, I pay for these memories with hard miles, ripped knuckles and lots of back aches from crawling under Elsie. 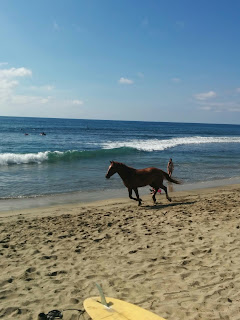 I caught an epic right, just as twilight bullied its way into the blackened blue of day. I rode it all the way to the sand. It was a perfect dismount - highest life form at the beach. Some days, if I packed my headlamp in my beach chair, I’d stay well past the sun drowning in Old Salty and I’d read my book knowing that I’d lived another perfect day.

Sayulita has everything going for it. Surprisingly, its saving grace is probably the dirt and the dust. It’s a beach frontier town wallowing in its final years before the death throes of gentrification. Once it gets vacuumed out and hermetically sealed its soul will die and you’ll pass it by just like Mazatlán.


I left the rig in the Placentia’s driveway and flew back to California for 18 days to attend the weddings of my friends Chris Miller and David Leppert. I was fortunate enough that they were on back to back Saturdays.

I got back to Sayulita, and Elsie on June 16th and my buddy and neighbor from S’Mish; Nate Ihm, flew down for a visit 3 days later. We surfed and drank. It was a great ending to my time in Sayulita as it made me appreciate it anew through his first time eyes.

I Got Some Air On That One!

Nate and I left Sayulita on June 23rd. I launched the truck on the road to Punta Mita. There is almost no engineering to their highways. Speed bumps are hidden and the “whoopty doos” they build into a freeway would be hilarious if only it would happen to you instead of me. I scream in anger and lose days and lots of money. I bucked the whole camper off its pallet that it is supposed to sit on in the bed of my truck. Giant problem. I couldn’t fix it for a week.
Nate flew out that day and I contracted with a welder in La Cruz to fix a crack that was threatening to rip my hitch in half.

My work started at 7:30 the next morning.
It would have been impossible to have packed more dirt under my fingernails. There wasn’t one square inch of my clothing that wasn’t drenched with sweat and sticking to my body. It was both 95 in temp and humidity. I had sped past exhaustion an hour before and it was only 2pm. I had another 7 hours of work. We got it done but it was a crap job completed with incorrect tools and every shortcut taken when I looked the other way. The reprieve from this horrible day was the coldest shower I could get (not that cold) and a couple hours in my air conditioned rig. Saved. I was revived enough to fight another day. 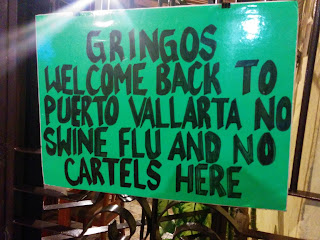 I left La Cruz, drove the 30 minutes into Puerto Vallarta, stocked up on groceries, propane, and tools at Home Depot, and parked Elsie at a deserted rv park near the beach. I had an electrical problem with the “Happi-Jacks” that lift the camper. I hired a rip-off artist named Abraham. He ripped me off but I learned something and the “Happi-Jacks” barely work again.

Then I got sick. Nothing new. It was the #1 killer in the Middle Ages but Cipro saved me from disappearing, and though I lost a week, I am now just fine.

Arturo And His Angels

Once I got my strength back it was time to re-position the camper correctly on the pallet in the bed of the truck. I had spotted a Goodyear tire shop on the way to the rv park. I walked back to it and explained my plan to Arturo the manager. It was quite ambitious and required me plus 3 men separating the camper from the truck and then lifting and shoving the 9000 lb truck in order to re-seat the camper. After 2 attempts we got it done.
Changing Course

“That ocean is an awesome giant -- and the beach makes a wonderful curb.” – Jere Mae Friedman (AKA: The Momma).

When I was a sailor, I used to say: “keep the land on my left.” Now I say: “keep the water on my right.”
My original plan was to take highway 200 all the way down to Hualtuco. That's the coastal road that takes one from beach town to resort mecca to surf pueblo. However, I was warned about dangers in the states of Michoacán and Guerrero. The real clincher was the heat. It's atrociously hot at sea level and I had just done 3 months at the beach surfing. After some further research I changed plans and decided to head to altitude and culture. I’m glad I did. I’m writing this from Guanajuato, but I’ll save this place for the next dispatch.

On the Road Again

The nice thing about sitting still is you learn all the strong wifi spots, where the clean toilets are, the best restaurants and how to play that wave like a local. What sitting still lacks is the daily new sensation of exploration and adventure. 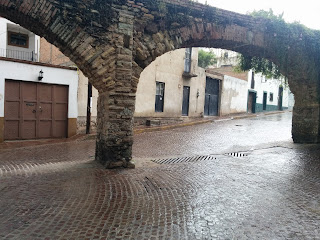 It feels good to hit the road again: July 2nd – PV, July 3rd - Mascota, July 5th - San Miguel El Alto, July 6th – Guanajuato. That windshield is like a big movie screen. I love watching the landscape unfold before me. I can do the miles. They aren’t easy, but I just eat ‘em up.

I’m not mastering my surroundings. That was the colonial mentality of 400 years ago. I’m not assimilating either. Yea, I’m darker, I move slower, and I siesta, but I’m conscious enough to realize that I will always be an outsider. I’m okay with that. I’m trying to live in some semblance of harmony with my host country, while soaking up the cultural differences that make travel wonderful. It’s working. I've made a commitment to inconvenience and hardship, but it's worth it. 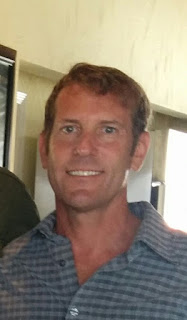 Blacktop Bobby
Posted by Bobby at 9:32 AM

Marvelous! But one question: what part of the decision making brought you to the conclusion that hauling around an apartment all over the two continents would be optimal?
Your friend with a 1993 vee-dub Westfalia who just wrapped up a 2770 miles with wife, three daughters and one fluffy dog!

That's a fair question. Why did I chose a 41 foot boat to try to sail around the world in when I know a guy who did it in a 19 footer? I think it boils down to what we are willing to do without. I wasn't willing to do without a toilet, or a shower and I wasn't willing to make and break my bed everyday. My projected trip is over 40,000 miles. Comfort is relative. I know my threshold. You my friend, are a hero for doing what you did in such a small space with so many other breathing entities.

A great entry...so this is a cumulation of the past 60 days it looks like?