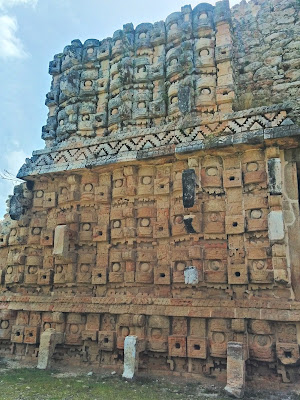 6 Months In Mexico. That’s All You Get When You Drive It.

The first half of my 6 months in the great nation of Mexico was cloaked in surfing and studying Spanish. The memories taste like salt, and in my ears I remember that Latin “es” hissing its way across the Pacific beaches. This changed as I moved inland to drift among the high plains with the cool temps. My time was spent soaking up the culture and staring at pyramids. I packed away my surfboards and pulled out a jacket, and mostly spoke English with ex-pats. Those were wonderful weeks but it’s since changed again. The temperatures on the Caribbean side are back to “completely unacceptable” and because there is no surf on this side I specialize in snorkeling and sweating and swatting at mosquitoes. It’s a good thing I can hold my breath so long, because it’s hard to sweat and get bit at depth. 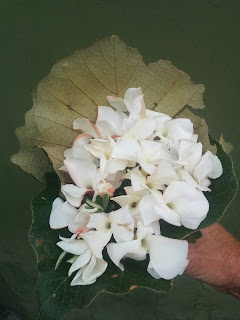 And Then There Were Two Of Me


I love my brother so much, and I am so fortunate that he loves me too. We never married. We never had kids. When we’re together it is undiluted and powerful. Zero pulls from other alliances. We have each other and that wonderful mother of ours, (All hail Birdy Mae!) and that is it…

I picked him up at the Cancun airport and that’s where I would drop him off 3 weeks later after driving the Mayan Riviera south to the Belize border and then back north. 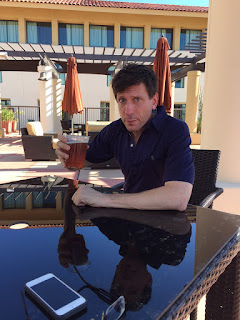 If you know Skinny, count yourself privileged. He is the most creative, enigmatic human to ever powerwalk the planet. The best of us aren’t even on Facebook. The rest of us throw our shoulders out trying to pat ourselves on the back with each post. Not him. This guy doesn’t even own a phone. Not even a flip phone. You can’t call or text him and when you are with him there are no distractions. He knows what he’s doing, and he knows exactly who he is. He’s an original, who has written and recorded 2 albums of music, forgotten more magic tricks than you’ll ever know, designed a game, speaks Japanese (after spending 14 years in Tokyo!), is a charm to spend hours with, and my only sibling.

There is a dirt road that will take you to a spot where the Yucatan hits the Caribbean Sea, and the place is called Xpu-Ha. Mayan. It’s all Mayan around here. Full respect. I’ve been to Egypt and I’ve seen their Pyramids, and they are no doubt impressive, but the sheer volume of the thousands of Pyramids here is mind blowing. They are everywhere! I’m pretty sure at this point that every hill is a pyramid waiting to be unearthed. A detour we were forced to take put us on a road with a perfectly symmetrical field of uniform mounds still covered in jungle. What do you think those were?

We met a French Canadian guy named Benny in Calderitas and adopted him as our mascot. Great guy. We made room for him in the cab of the truck and he pitched his tent next to Elsie for 10 nights. We played soccer with kids on the beach, ruined our beers with michelada sauce, snorkeled ancient Spanish cannons, climbed pre-Columbian pyramids, and swam in caves. Essentially we lived every 15 year olds fantasy. Good thing I never grew up.

In this chapter of “scaring the hell out of my mom”, we take an in-depth look at submerged claustrophobia in a third world cave dive. 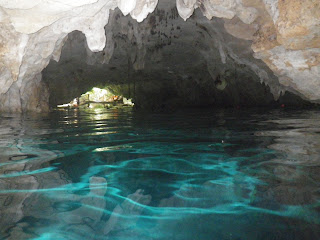 Welcome to the Yucatan : the rivers, streams, creeks – all waterways - are underground, and occasionally the water flowing beneath the earth’s surface washes away enough structural integrity to cause a collapse. They call it a “Cenote”. This sinkhole becomes the access point for an amazing web of water filled tunnels, and caverns that were once dry caves but are now flooded. Here’s the video my dive buddy made of me. In some of the shots it’s difficult to believe that we are completely submerged since the water clarity is so perfect. 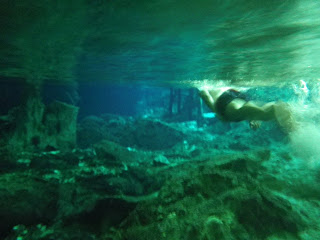 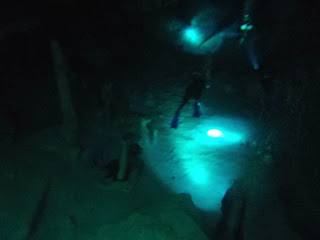 There was a moment that I will never admit to, in which the panic grabbed me by the throat and I just knew that an immediately impending watery struggle would soon end in a horrific death after ripping all my fingernails out against the limestone. I had to forcibly calm myself and continue to follow the “string of life” that is tied from rock to rock and shows the way out of this teeter tottering maze of fear and excitement. And then it subsided. What was that? I thought I didn’t get that anymore. I thought the sea taught me to stare down anything. Maybe good, maybe bad. Maybe still human. Hmmm. 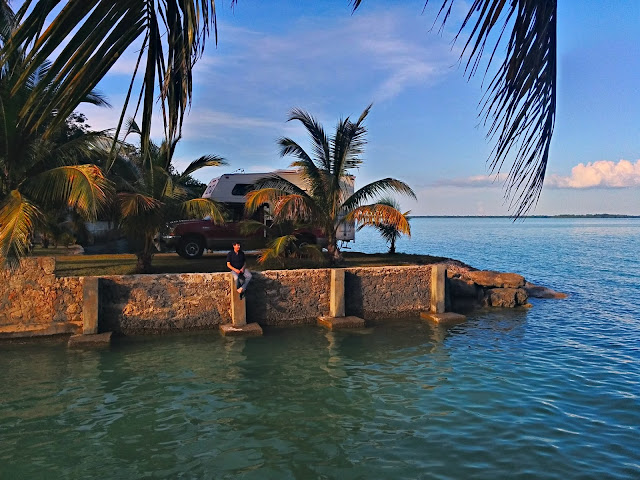 The Added Bonus Of International Travel

It isn’t only about Mexico. The great thing about travel is that you meet people from all over. I got drunk with a Canadian girl and told her that whenever I can tell that a confrontation is coming to a head I try to let it out that I’m from Canada (I’m not from Canada) so that my future enemy won’t slam my country for something stupid that I did. I’ll say something like, “If we were in Toronto right now, that crap wouldn’t be tolerated.” She said, “That’s cool, whenever I break something in a bar, I always start chanting, USA! USA!” What a class act we are.  Building bonds between borders. I’m just doing my part for international relations.

The hygiene: I've watched cooks open packages of cheese with their teeth, cough into their hands and then flake it into my salad. That's immediate familiarity, minus the benefits, and with lasting effects. Go straight to fever and dysentery, do not stop at go, do not collect $200. Is there a sweeter bunch of hardworking honest people you’d rather get sick with? Whenever a person makes a broad sweeping generality they are doomed to look like an idiot but I’m willing to risk it anyway: “I love Mexicans.” I never would have said that as a white kid growing up in the Southwest of America but that was ignorance, and I was wrong. They are excellent people and I’m a huge fan. 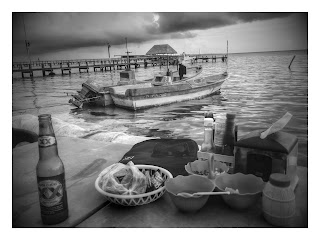 They are poor, they know they are poor and there is no shame in being poor. In fact, I’d go one step further and say that they actually have a sense of pride in being poor because that’s the norm. Humility goes a long way and I have much more to learn and nearly nothing to teach. Because the following story is completely true I am leaving details out so I don’t embarrass my friend.

We’d been drinking buddies for a week, and in those hazy drunken hours we spoke of our dreams, and our curses, and our windfalls and our broken hearts, and the ones who lifted a hand and pulled us back to sanity. We’re the same age and we’d become friends. And for every drink I bought this local he repaid it in kind with the next round or the next evening. I’ve had plenty of lopsided foreign relationships were I ended up being the sponsor for someone else’s drinking habit. This was not one of those. I won’t type his name out of respect. I know he’s reading this and he knows what’s coming next.  I’ll try to muster all the grace I can.

He’d been in Elsie and eventually he invited me back to his home. As we stood outside the gate, he fumbled with the key, and he said the following words; “Now, Roberto – I am very poor, but don’t feel badly for me. I am happy and I have enough.” I wasn’t prepared for what was on the other side of that gate. It was poverty on a level I’d never seen outside of some barren islands in Indonesia. It was 3 walls with a tarp amidst the ruins of an old building. There were 2 horrible couches, no running water and hijacked electricity from the building next door. He was squatting in what looked like a bombed out building in Fallujah.

Then it got worse. “Roberto, when I left this city as a teenager I swore I would never again return because my childhood was so hard. But, life takes detours and I am again here in my childhood home, back with my mother who raised me.” Then it dawned on me, this wasn’t a new predicament. This is where he was born and raised and this is where he lives again with his mother on one couch and he on the other and a tarp over their heads. Oh god, the realization felt like I was 100 feet under water and someone had just turned off the valve on my scuba tank. I thought I might throw up if I could only breathe. I finally blinked. I swallowed hard and said something about the mosquitos and needing to leave due to the bites. I know he felt my discomfort. I wasn’t hiding it successfully. I stumbled away carrying my soul crushing despair and the depression it caused in me was actually physical. When I’d walked a couple miles away, I called my mom. I cried while I spoke to her. It had really affected me. 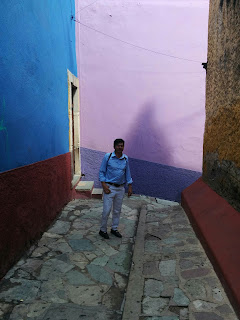 But what exactly had done this to me? I’d seen poverty before. I lived in the poverty stricken 3rd world for 6 years while on Barraveigh. Then I remembered his words before he unlocked the gate; “I am happy and I have enough.” And with those utterances replaying in my mind, the slightest glimmer of beauty began to inch its way in. The hope this man displayed in his humble yet resilient attitude was spreading in my thoughts and it buoyed my damaged spirit. Thinking back, I believe that what hit me so hard was the realization that I am not man enough to move forward with those odds stacked against me like he was doing every day, and I never will be. I had come face to face with a better man than me, and the truth is, I did that every day in Mexico and didn’t even know it.

Mexico – What are you waiting for?

That Dive video was extra special. You're a brave scout to go there.