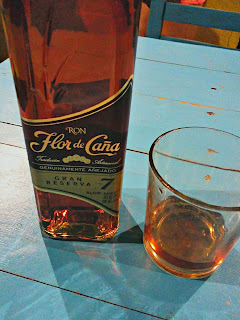 I ordered a 7 year old Flor De Cana neat. “Actually, make it a double”. I know how to trim my own sails. In 10 minutes it’s gone and in 15 minutes I know everyone in the bar. There are 3 of us, and that’s counting the bartender. It’s midday and I just escaped my own murder. Here’s the story:

I used a “Tramitador”, who is a local that knows the procedure of crossing the border from Honduras to Nicaragua. I paid him ten bucks and he eased me through the bureaucracy. When we were cleared through, he asked for a ride to the end of the border zone and since I had just spent 2 hours with him I was happy to help. We had a pleasant ride and when he hopped out a young man standing right in that spot immediately asked for a lift to the next town. Ordinarily I would have declined but my door was already open, the truck was in park, I’d just had a good experience and he caught me off guard.

As soon as he climbed in and I saw how dirty he was I knew I had made a mistake.  It went downhill from there quickly. I tried to make small talk in Spanish and he responded in curt English.

After a long silence he asked me if his ear disturbed me. I looked at the side of his head to see that his ear had been cut off. “I didn’t even notice”.

More silence. “My dad was a mean drunk but good with a knife.”

When you have a camper on the back of a pickup truck that rearview mirror that lives in the middle of your windshield is only there so you can catch a glimpse of yourself, stare into your own eyes while thinking, “You can do this. Don’t shut down. Make him see you as a human.”

I came back with a smile and started talking about my trip so far, my mom and brother whom I love, all the wonderful things I’ve seen, how kind everyone has been to me and then I asked him why he wanted to go to Managua, the capital of Nicaragua.

I came up with a plan. “Miguel, you aren’t going to get a job in those clothes. I have some clean clothes for you in the back. I’m going to give them to you. When we stop in a little bit for food, I’ll fill your stomach and get you dressed for success and listen, I can even give you some money so you can take the bus and won’t have to hitchhike. I believe things are going to get better for you. I’ll help you.”

His attitude improved. He was more talkative and he told me about his gang life in San Pedro Sula, the notoriously dangerous capital of Honduras. He talked about killing people but then amended his proclamation to clarify that those killings were when he was in the military. I wasn’t aware that Honduras had sent troops anywhere but I left it alone.

I remember thinking, “I have 62 km to the next town. Keep the speed up and stop at nothing until we are in a public place.”

Of all places, when we entered the city of Esteli I saw a Pizza Hut and pulled right in. I had my door open before I even put it in park. “Come on man, I’ll buy. Let’s eat all the pizza we can!” While he was gorging himself I excused myself for the bathroom. I went out to the camper and grabbed him a clean shirt and a pair of jeans. I gave them to him at the table with the change from the meal – easily enough for him to get a bus to Managua. I tried to say goodbye at the restaurant but he followed me to the truck and asked for a ride to the edge of town so he could start hitchhiking again.

“Miguel, that’s why I gave you the money, so you could take the bus.”

“I’m sorry, I bought you food, gave you clothes and cash, and I gotta be honest, I’m not comfortable getting back in the truck with you. I’m going to leave by myself now.”

He was silent. We were standing in front of Pizza Hut with a big glass picture window with plenty of diners just a meter away. I felt comfortable enough to ask the following: “Miguel, when you got in the truck this morning, did you mean to do me harm?” 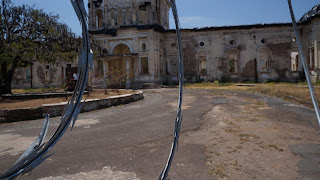 Night and Day
There is a huge geographical difference between Nicaragua and Honduras. Honduras was the Switzerland of Central America with its lush green pastures saddled between mountains crowned with cool moist air while Nicaruagua is flat, dead, brown, dry & ugly. 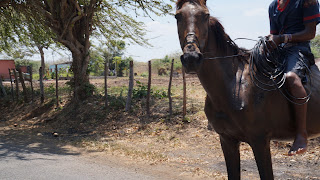 I went from the prettiest country to the ugliest country in Central America. The beaches were the saving grace, and I put Maderas at the top (but I’m getting ahead of myself) No more Mayans of ancient splendor – I entered with a bad taste and it grew even more sour. Then I met the police.

My First Sustained Corruption
These cops are shameless. They pull you over and steal your lunch money. It’s like being the last guy in the locker room at Central High all over again. The secret to dealing with these corrupt cops actually proved to me that my Spanish has really improved. I had to consciously dumb down my vocabulary and purposely conjugate my verbs incorrectly. The less I speak & comprehend, the sooner they get frustrated and wave me on.

Catnip
If the cops are this corrupt I began to think I really needed to be on my toes with the more pedestrian version of thieves. Shiny and new is like catnip to those who want your stuff, that’s why I never wash Elsie. I want her to look beat and broke from the exterior. Shiny and new is all relative: Someone tried to pop the lock on the cab of the truck and rip me off while I was sleeping. They screwed the door up for a day but they got nothing. My good friend and personal mechanic fixed the damage. Ladies and gentlemen: Mark Sessions

2 Weeks With A Childhood Friend
Mark is actually the friend who found and purchased the camper and truck that would become Elsie. “You don’t have to buy it, but if you want it, you can have it at cost. I think you should fly over here and check it out.” I did, and I did. Then he put his boys to work adapting her to her upcoming travails. She’s done well because they did a fine job.

We drove around Nicaragua and had one touristy good time after another. Mark has only traveled to Mexico and he was really shocked by how many people he met from all over the world that were traveling Central America. He made me laugh out loud a few times and I want to share the quotes with you. It was so frequent and classic that I took to recording him.

“You're Dutch? My wife is a dental hygienist, and she went to.... Hey Bobby. Where'd she go again? Yea, she went to the Dominican Republic.”

“No we don't eat lamb. That's for foreigners. Hey Bobby how do you say "fatty" in Swiss?”

To a Dutch girl: “Do you call your parents every day? Cuz I have a 21 year old daughter. How old are you? Bobby, how old do you think she is? Ask her how old she is. See, parents worry.”

“But this metal is springy. See, springy. Look, see how it bounces? It's springy. Bobby, how do you say “springy” or maybe “bouncy”?”

Find what you love and let it kill you
I’m not trying to be morbid here, but we all expire. I wouldn’t post this but my mom is actually going to be here in a couple days and I can sooth the upset that this will bring. 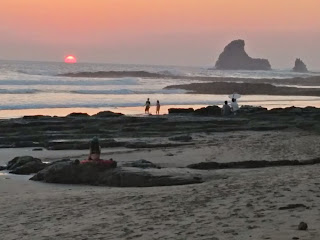 Death while adventuring: Worth it. So worth it. The pain doesn’t last that long. Even when it’s a bad death, in the big scope, it wasn’t that long or that much suffering. And the memories I’ve savored since I began all those years ago wouldn’t have been with me if I didn’t take chances. So I take chances and I eventually will get caught. Hey, on a long enough timeline – everything ends in disaster, and it was completely worth it. Please remember this if you ever find yourself standing in front of my closed casket.

No I don’t have a death wish. I’ve never had a suicidal tendency in my life. For this dispatch - I started on a scary note and I’m going out on one. But, I promise on the next dispatch to also write whatever I want….;-)


Captain Bobby
Posted by Bobby at 9:26 AM