The last dispatch left us in Santiago Chile. It was early fall. We had some time to enjoy the city and drink good wine before Paso Libertadores (our Andes crossing) became unpassable. We traversed the Andes for the umpteenth time and once again made our way across Argentina stopping to see Rulo & Sere in Alicia, and Diego & Ana in Belen De Escobar.


This webpage will return to Argentina in the near future, but this dispatch is about Brazil. We drove for 5 days through the long arm of northern Argentina which borders Uruguay, Paraguay, and of course Brazil. We made 2 noteworthy stops before entering our next country of discovery in South America.

The Missions of San Ignacio - Argentina 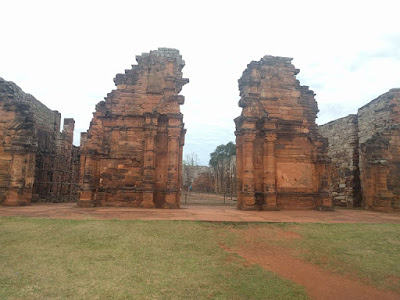 The first was built in 1610. The Jesuits abandoned it in 1767 and in 1817 the Portuguese forces blew them apart. They were forgotten for 80 years until someone stumbled across them in 1897. Restoration began in 1940. The width of the walls averages 2 meters! 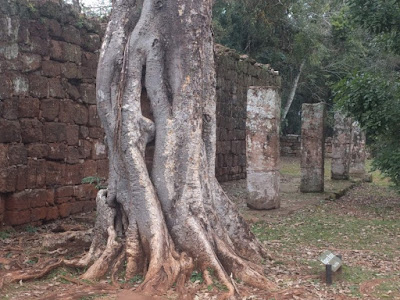 It’s only the largest waterfall in the world. It straddles the Argentinian and Brazilian borders so you can view it from both sides. We only saw it from the Argentinian side, so our first views of Brasil were rather breathtaking. There are 2 distinct vistas and they are equally spectacular: 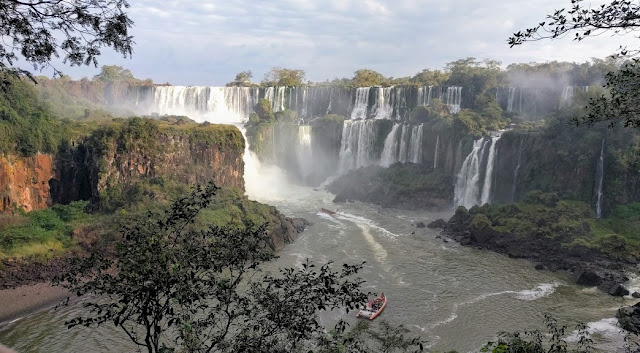 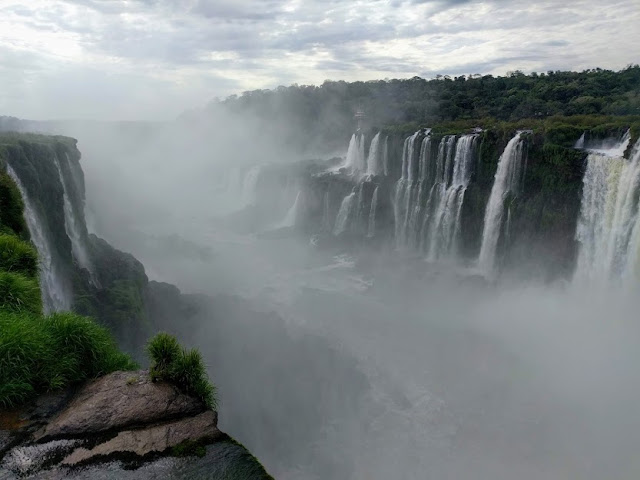 It was a five day wait at the border for my Brasilian visa, and then the real driving began. This is a very large country. Yes the USA is larger but only because of Alaska. If you pull that out of the formula and compare only the lower 48 Brasil wins by 200,000 square miles. It borders every country in South America except Ecuador and Chile. For over a century they’ve been taking immigrants from everywhere so she has 210,000,000 different faces.

That first day of crossing a border is really special. It’s an immediate immersion into a new culture. The street signs, the method of road construction, the architecture and city planning - it’s always a little different. Do they use roundabouts or intersections?  A gas station in the middle of the highway? – that’s novel! It’s always interesting to see how a different culture solves infrastructure. 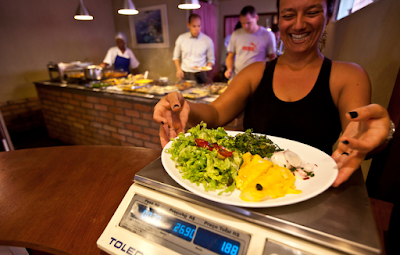 Maybe Portuguese sounds like a happy Russian, if there was such a thing, trying to speak Spanish. Or if a French goat could speak. It’s got that tonal nasal quality to some of its words so I’m reminded of Vietnamese. But don’t be confused; unlike Vietnamese, it’s very pleasing to the ear.

They aren’t comfortable not affixing a vowel to the end of a word. Their language does it, so when they speak English they auto correct. “Lap top” becomes “Lapi-topi”, Milk shake” becomes “Milky Shakey”. Netflix is “Netchiflicki”. How cute is that? I started mispronouncing English words just to encourage their specific brand of adorable. Kitchenette became Kitchy Netchy. We’d watch Netchiflicki in the Kitchy Netchy.

We drove for days to track down a family of overlanders that we had met back in Peru. We met Martin (Marcheen) at The Atacadista: Brazil beats Argentina hands down for food options in the super market except for cereal and wine.

And strangely enough – you’ll never find celery. They either never developed a taste for it or they can’t grow it. They know about peanut butter. Sad to realize they’ve never slathered the trough of a celery stick with the viscose wonderment of peanut butter. Oh well, they invented Samba. I can forgive them.

Sometimes it’s not the place but the people. On 3 different occasions we parked at this overflowing trailer park and though I couldn’t communicate with anyone I never felt more welcome. Meat meat meat, beer beer beer, big happy smiles - That’s all you need. 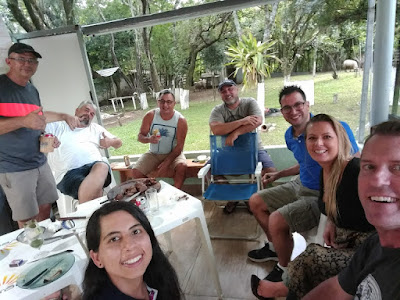 I sold my sailboat Barraveigh to Luiz Belo in 2010 in Bali and we became friends. We spent some great times getting reacquainted in his landlocked home town of Curitiba. 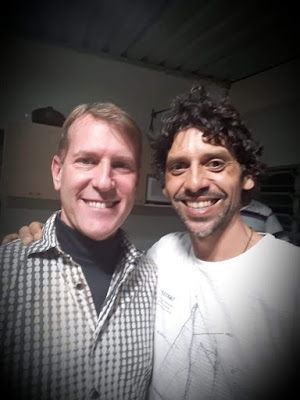 They love salt so much that their snacks are called “salgados”. That translates as “Salties”. And since salt is the most popular seasoning they even bump it up a level and make artisanal salgados. Guess what goes on meat? Yep, salt and salt alone. And then more salt. Our trailer park was filled with smiling wonderful Brasileros who generously tried to explode my organs with salt laden BBQs (churrascos) nightly. Guard your meat, they will see a spot that doesn’t sparkle white with sodium crystals and they’ll smash a handful of salt right on top of your filet mignon when you reach for your caipirinha. And they love to dip their meat in farinha; a flour made from cassava. Weird at first but it grew on me. And you don’t get your own plate. Instead the cutting board is passed around and you eat with your fingers. That’s hard for a germ freak like me but I came to adapt, and now I love not having to wash all those dishes when the party is over.

The Caves of Parque PETAR

Yes the Amazon of Brasil is being denuded but so is the Atlantic Forest. This park is one exception. The big draw is the caves - 350 of them. Totally Protected and worth the drive. We even made friends - Hard not to in Brasil. 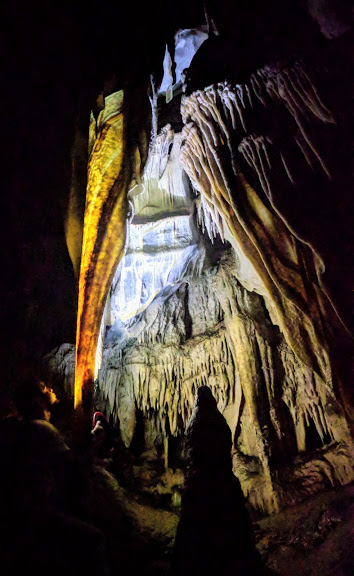 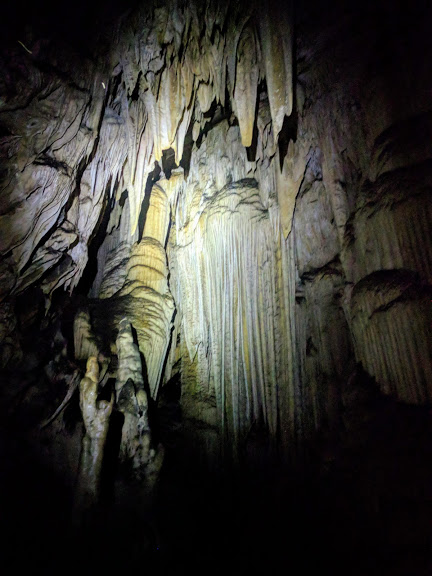 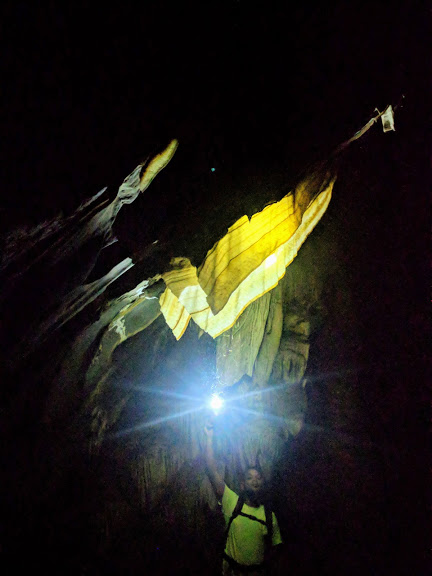 Our time in Brasil would have been a shadow of itself without Erick De Castro Rosa as our nexus. We met on a hike to a volcano in El Salvador years before: “You live in your vehicle? I live in my vehicle!” We became friends and stayed in touch. I have learned over the years that Erick is a legend. He lived in the no-man’s land between Nicaragua and Costa Rica for 12 days on the kindness of others when the bureaucrats wouldn’t let him enter with his steering wheel on the right hand side. He spent 45 days in isolation paddling through the Amazon River basin on an unsupported self-sustained excursion. He speaks 3 languages. He’s taller and younger than me and can dance. I wait for the bouncer to usher me away from the cool kids table, but Erick keeps talking to me. When we were in Curitiba he sent over his friends Kleber and Fran. When we got to Florianopolis he introduced us to Mauricio and Rita. He plugged us into his community of friends multiple times. That’s the beauty of this culture. “They are quality, I vouch for them” And just like that, Brasileros will go out of their way to take you in. 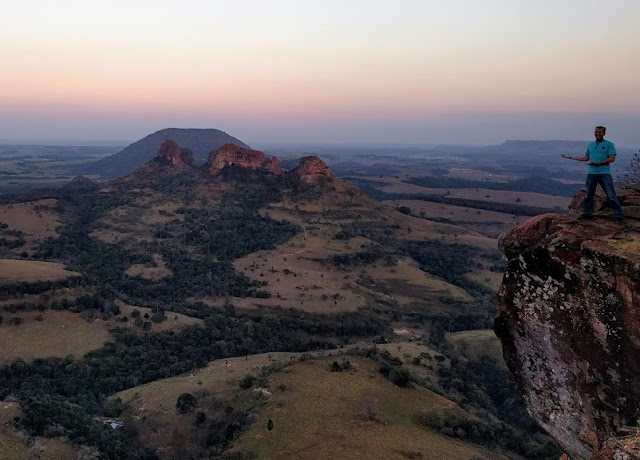 We parked in front of his parents’ house in their small town for a few nights and really enjoyed the surroundings. 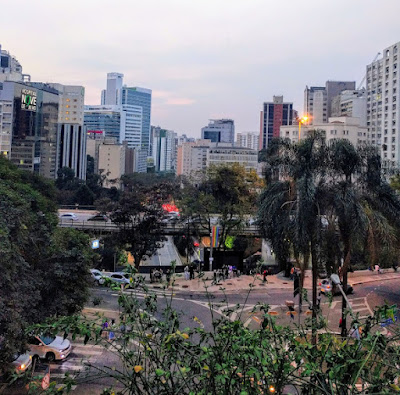 Brazilians are a proud people and they should be; their food, beaches, drinks, dancing, Carnival and …. transsexuals. Who does it better – Brasil or Thailand? Brasil wins! But why so many? I’m not judging, just curious. Why would those 2 countries have such a disproportionate number? Message me please. (Interestingly – I’m writing this in Thailand).

We wanted to see the big city. Erick was a little concerned for our safety so he came along as a guide, should we hit road construction and a detour. Driving into a favela could be a death sentence. We navigated the route to his parent’s apartment building and managed to park Elsie in a guarded lot. Sometimes lucky. We had a fun cosmopolitan experience for 3 nights and then drove to the coast where we said goodbye to Erick. 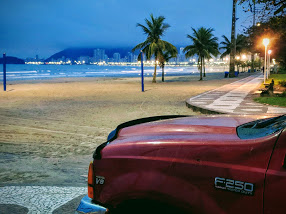 Brasil and her beaches. Oh boy. I need to warn you.... Brazil invented the ass. They do ass so well that you could cuddle up to one for a year, fall in love, share your greatest secrets, and never even get around to talking to its owner. The day after Brazil invented the ass, Colombia and Cuba said, “uh huh, we can do that.” And they did. It’s a toss-up for world’s greatest ass. There’s a million dollar tour group idea for you: “The Nalgas Tour of Latin America”. Can I get a royalty? 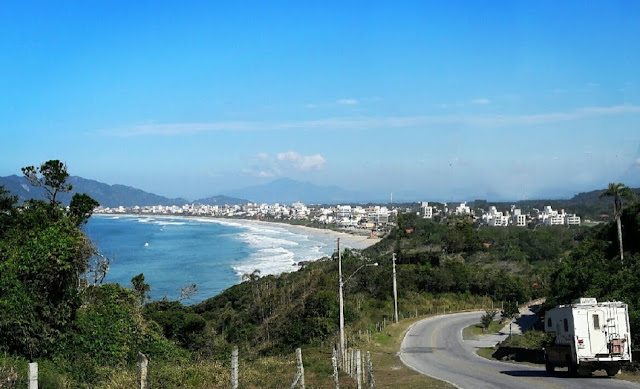 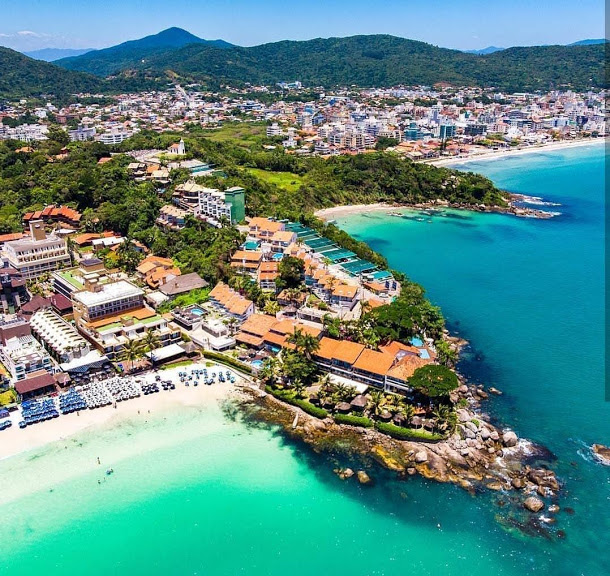 I can’t speak for all of Brasil but the corner I saw was the perfect mix between first world and third world. Nature is protected in the form of near pristine parks, but you can still drink on the beach. It’s cheap and loose but… And this is huge.... They don't litter. I know that’s a broad stroke statement, and of course you will find exceptions, but I found that to be the rule. The infrastructure is (almost) all in place but at reduced prices to the first world, and the people are Wunderbar! 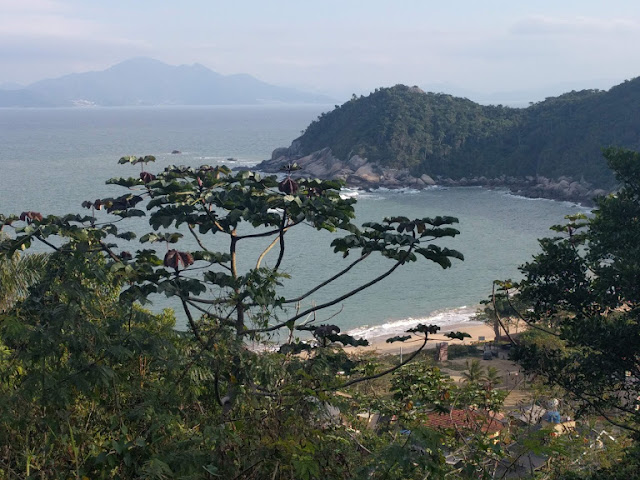 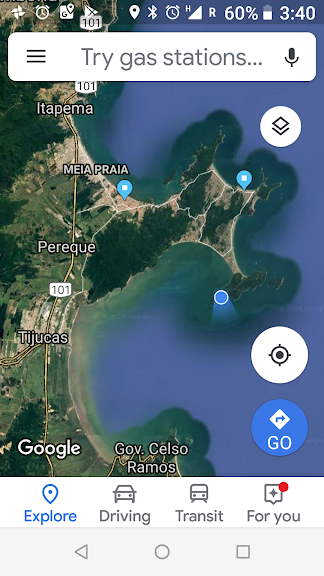 Bombinhas is an angry bull neck of a peninsula that thrusts her head into the turmoil of the Atlantic Ocean. You’ll find placid beaches on one side and pounding surf on the other.

Florianopolis
There is an island south of Bombinhas in the same state of Santa Catarina called Florianopolis. The locals call it Floripa. I call it heaven on earth. With 42 beaches, a couple lakes in the middle and many fantastic restaurants you might find something to like as well. They have mansions in the north and cattle farms in the south. There’s a little something for everyone here. 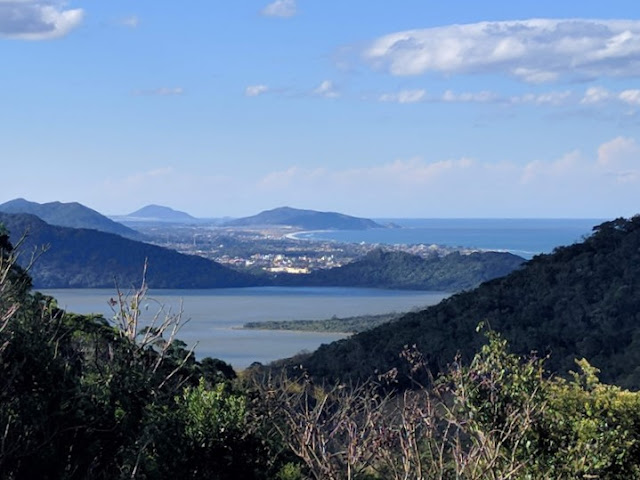 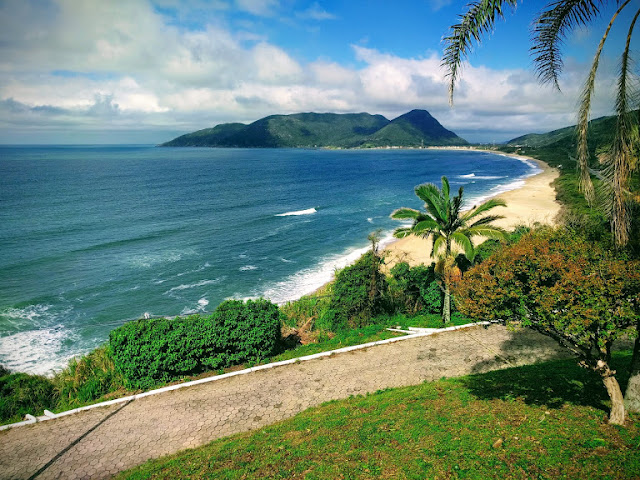 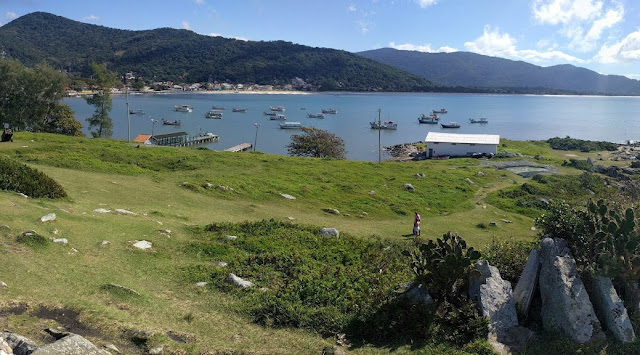 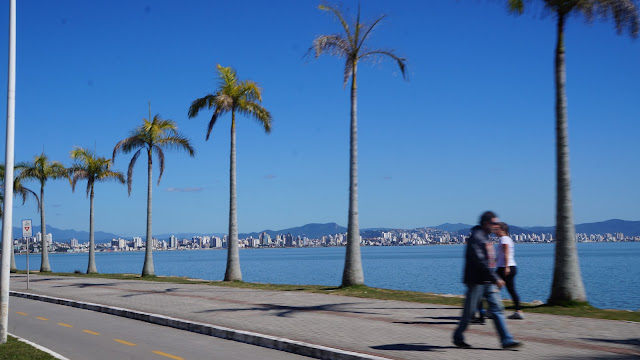 We made real friends and enjoyed cooking and touring the island together. Brazilians are just as inclusive and friendly as Argentinians. They do seem to be slightly apologetic for using cachaça in a caipirinha. As if they recognize that the whole world would prefer vodka (caipiroska). Not me. I prefer cachaça. I love it in a caipirinha and I’ve even been known to drink the good stuff neat.

Sorry, I’m going to hurt some feelings with this one but this enormous state is only worth visiting for friends. There are a few attractions but it can’t compete with Santa Catarina and few would argue with that. The inhabitants call themselves “gauchos” and they all go to Floripa and Bombinhas to vacation. 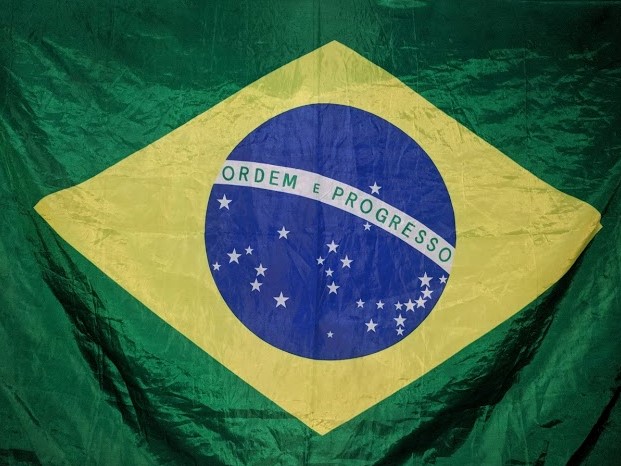 We had such a great tour on this lap around this big beautiful country that we swore we’d return. And we did. But first we drove thousands more miles through Uruguay, Argentina, and Bolivia. Stay tuned.

Your man on point,
Blacktop Bobby